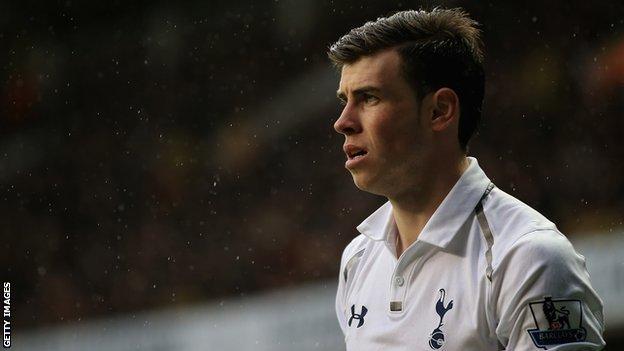 Gareth Bale would listen to an offer from Real Madrid if they agreed a fee with Tottenham, according to his agent.

Jonathan Barnett told a Spanish television show the Wales winger would be honoured to hear from Madrid president Florentino Perez.

He said: "If somebody like Mr Perez was interested in Gareth Bale it would be a great honour and we would listen."

Bale, 23, is under contract at White Hart Lane until 2016 and the London club want to extend his deal.

Barnett added he is not in talks with any potential suitors for the Tottenham player, who scored 26 goals last season.

If PFA and Football Writers' Player of the Year Bale was to leave Tottenham, Barnett expects the fee to top the price Barcelona are paying for Brazilian star Neymar.

While Barcelona have stayed silent about the amount Santos are receiving for the 21-year-old, Neymar was reportedly valued at £50m.

"Bale is better than Neymar," Barnett added. "He's proved himself in the best league in the world.

"Listen, it's crazy, but whatever Neymar cost, Gareth Bale is worth more.

"I would hope that any club who wants him, wants him not because they lost Neymar. I would think he'd have to be their first choice."