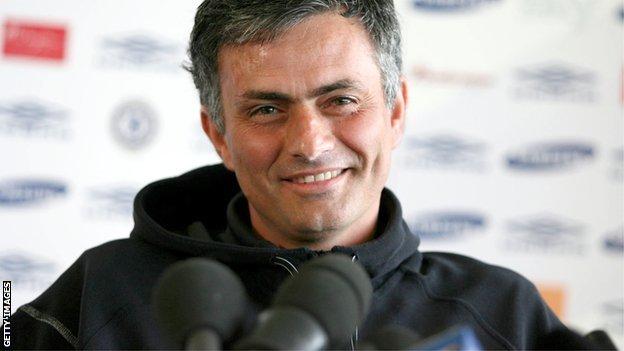 Jose Mourinho is back as manager of Chelsea after leaving Stamford Bridge in September 2007.

His first spell at the club saw him win the Premier League twice, the FA Cup, the League Cup twice and the Community Shield.

He was one of the most colourful characters in the British game and has since enjoyed success at Inter Milan and Real Madrid before returning to London.

BBC Sport looks at some of Mourinho's best quotes and controversies.

On becoming Chelsea manager for the first time: "I have top players and I'm sorry, we have a top manager. Please do not call me arrogant because what I say is true. I'm European champion, I'm not one out of the bottle, I think I'm a special one."

On bird flu: "I'm feeling a lot of pressure with the swan in Scotland. It's not far and I'm more scared of the swan than of football. What's football compared to life? A swan with bird flu, for me that's a drama."

On drinking wine with then-Manchester United manager Sir Alex Ferguson: "After the game, after the press conference, we were together in my office. The wine we were drinking was very bad and he was complaining. When we go to Old Trafford it's my birthday and I will go with a beautiful bottle of Portuguese wine."

On eggs: "Omelettes, eggs. No eggs, no omelettes. And it depends on the quality of the eggs in the supermarket. They are class one, two or three and some are more expensive than others and some give you better omelettes. When the class one eggs are not available you have a problem."

On being sacked: "If the club decide to sack me because of bad results that's part of the game. If it happens I will be a millionaire and get another club a couple of months later."

On Chelsea's pitch: "Sometimes you see beautiful people with no brains. Sometimes you have ugly people who are intelligent, like scientists. Our pitch is a bit like that. From the top it's a disgrace but the ball rolls at normal speed."

On playing Chelsea, while manager of Real Madrid: "If I play them in the Champions League, I want to go there and kill them - that's my message,"

Then-Sheffield United manager Neil Warnock: "My wife will be glad about Mourinho coming to Bramall Lane because he's a good looking swine, isn't he?"

Then-Chelsea striker Didier Drogba's reaction to Mourinho leaving the London club: "I find Jose's 'eviction' hard to take. I could not see the blow coming so brutally.

"It changes an awful lot of things. I am in the sort of nervous state I've never dreamed about before. Many of us used to play first and foremost for the manager. Now we need to forget those feelings and find another source of motivation."

Ian Holloway on Mourinho's sacking by Chelsea: "Football has gone mad. He is one of the best managers in the world. I'm devastated. I was learning from him from afar. He makes you feel 25-foot tall and I'm going to sorely miss him."

Barcelona vice-president Carles Vilarrubi on Mourinho's return to Chelsea: "It is not good for English football. If Mourinho behaves like he did in Spain it will only be an unhappy relationship. In his three years in Spain he only created disagreements and arguments. I am happy he is leaving and so is everyone in Spanish football."

February 2005: After Chelsea's 2-1 defeat against Barcelona in the first leg of their last-16 clash, Mourinho wrongly accused Barcelona coach Frank Rijkaard of visiting referee Anders Frisk at half-time. Mourinho is fined £8,900, given a two-match touchline ban and called an "enemy of football" by the head of Uefa's referees committee Volker Roth.

March 2005: Mourinho is fined £5,000 after he alleged Manchester United players were guilty of "fault and fault and cheat and cheat" during a Carling Cup semi-final clash.

January to March 2010: While manager of Inter Milan, Mourinho is fined three times in as many months by the Italian Football Federation.

December 2010: Mourinho is banned for one Champions League match after being found guilty of improper conduct. It follows the dismissal of Real Madrid players Xabi Alonso and Sergio Ramos during a Champions League game against Ajax.

January 2013: After dropping club captain Iker Casillas before the mid-winter break, reports emerge in the Spanish press of disagreements between Mourinho and some of his senior players. Stories continue to appear throughout the rest of the season about disharmony in the squad, with centre-back Pepe the latest to fall foul of Mourinho last month.

May 2013: In a bad-tempered Copa del Rey final defeat by neighbours Atletico Madrid, Mourinho is sent from the bench for furiously protesting a decision from the referee. He was jeered by sections of the Real support during his final game in charge against Osasuna.