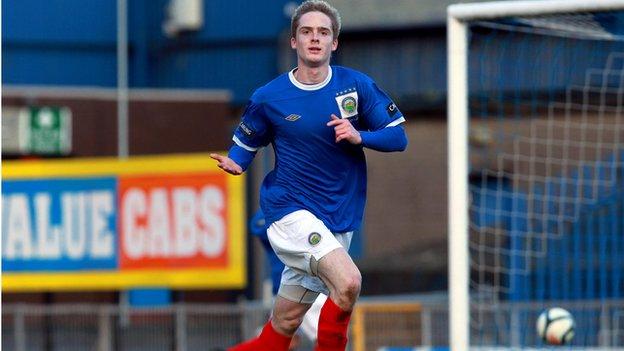 Aaron Burns has signed a one-year contract with former club Linfield after being released by Portadown.

The versatile midfielder moved to Shamrock Park last summer after failing to agree terms with the Blues.

"I've quite a few regrets about leaving a year ago and I've made that known to the manager but when you're young, you are always learning," admitted Burns.

I know that Linfield is the place to be. I missed the club and am determined to give my best," said the 21-year-old.

"I have three league winners medals and a cup winners medal from my previous spell at the club, so I'm well aware how fortunate I was and how being at the club was good for me.

"Hopefully, I'll get the chance to go on and win a few more medals and bring further success to the club."

"Aaron knows that this is very much an opportunity and a challenge for him and I'm pleased to welcome him back," added the Blues' boss.

Burns is the fourth new arrival at Windsor Park this summer, following the signings of Mark Haughey, Matthew Clarke and Andrew Waterworth.