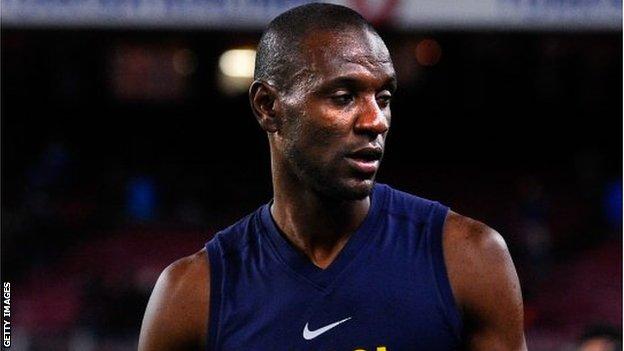 Former France international Eric Abidal will leave Barcelona this summer - but says he plans to continue playing for two or three years.

A tearful Abidal said: "I would have liked to have stayed and played on but the club saw it differently and I have to respect their decision."

Barcelona said that they hoped Abidal would return as a coach in the future.

Abidal said: "I'm leaving but I'll definitely be back. I have played here for six years and it's been the biggest experience of my life."

The left-back was joined by club president Sandro Rosell and sports director Andoni Zubizarreta at a news conference, with the pair praising him for his bravery in adversity.

"He has won our hearts because you can never write him off," Rosell said. "He has had the strength to overcome all types of difficulties - he has taught us life lessons we will never forget.

"We are not saying goodbye, only 'until we meet again'. When he decides to stop playing football, he can come back here to be the technical director of all of our football academies on a worldwide level."

Abidal joined Barca from Lyon in 2007 and won 15 trophies during his stay at the Nou Camp.

After he was diagnosed with a liver tumour, Abidal underwent an operation in March 2011 before making a triumphant return two months later to lift the Champions League trophy after Barca's victory over Manchester United in the final at Wembley.

He then had a transplant in April 2012 with part of an organ donated by his cousin.

When Barca were presented with the Spanish league trophy earlier this month Abidal and coach Tito Vilanova, who has gone through a battle with throat cancer, lifted it together on the pitch.