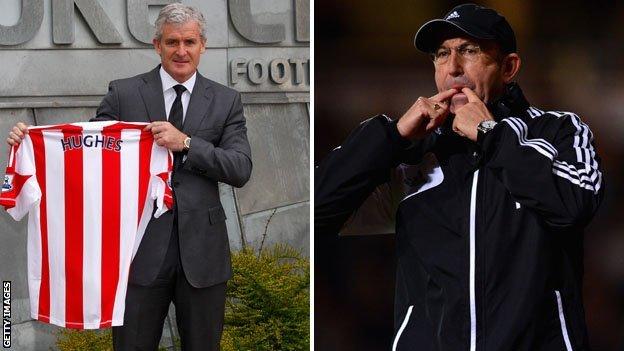 Before he has tasted his first Staffordshire oatcake, Mark Hughes will know that he is not entirely welcome at Stoke City.

One fan went to the trouble outside the Britannia Stadium.

But the new boss can take comfort from the fact that his predecessor Tony Pulis - possibly second only to Tony Waddington, who was in charge between 1960 and 1977, as Stoke's greatest ever manager - was never universally loved.

Results-wise, Pulis must be regarded as a success in the Potteries.

In his seven-year second spell, the Welshman took Stoke from the middle of the Championship to regular safety in the Premier League, with a first FA Cup final and a European adventure thrown in for good measure.

Pulis, however, faced almost constant criticism of his methods.

To some his team's style was aggressive, physical and direct if undoubtedly effective. To others it was negative, unimaginative and, in Arsene Wenger's view, "rugby".

Hughes too has had his run-ins with Arsenal. Cesc Fabregas once questioned how a former Barcelona player could set his Blackburn side up to play what the young Spaniard called "not Barcelona football".

In that sense, questions over Hughes's appointment are understandable.

When Pulis departed, the need for Stoke to take a "different direction" was highlighted - and the football played at Manchester City and Fulham under Hughes suggests that he will certainly bring more finesse to his new role.

But rather than a radical change of direction, Potters chairman Peter Coates may have gone for a pragmatic option. He may well have plumped for a man who could simply refine what the current group of players are asked to do. Evolution, rather than revolution.

"Stoke have got players that can handle the ball, but maybe Tony didn't always give them the chance to express themselves," defender Dominic Matteo, who played under Hughes at Blackburn and Pulis at Stoke, told BBC Sport.

"Pulis and Hughes are very similar in the way they ask their teams to defend. Going forward, Hughes will like to keep the ball on the ground more and give the players a little more freedom.

"Stoke could have gone for more of a footballing manager, but Hughes will come in and work with what he's got."

Style was not Pulis's only problem. A £6m investment in training facilities and the club's academy was a sign of Coates's intention for the Potters to nurture more of their own talent.

But it has been argued that Pulis was not a manager who always gave youth its opportunity.

"Tony used the likes of Ryan Shotton, Andy Wilkinson and Carl Dickinson from the academy, but if a young player didn't fit into his team, he didn't use them, which is fair enough," said former Stoke goalkeeper Steve Simonsen, who was part of the side that won promotion from the Championship in 2008.

"Now the chairman has invested in the academy, he wants to see some rewards from it."

Pulis's record in the transfer market in the latter stages of his time at Stoke has also been questioned.

Whereas the early acquisitions of Ricardo Fuller and Liam Lawrence were key to getting into the Premier League and the additions of Matthew Etherington and James Beattie vital in staying there, later signings Peter Crouch and Kenwyne Jones have struggled to justify their big price tags.

For the likes of Diego Arismendi, Wilson Palacios, Jamie Ness and Maurice Edu, holding a City shirt in front of the Boothen End on the day they signed for the Potters was the most time they got to spend with the red and white stripes.

So, as former Wales boss Hughes embarks on his fifth Premier League job - signing a three-year deal in the process - success with both Coates's investment in the club's youth and the chairman's money in the transfer market will be high on his list of objectives.

In that regard, City will be hoping they get the Hughes that performed well with the modest budgets of Blackburn and Fulham, rather than the one that signed 16 players in 10 months in charge of QPR, who were relegated at the end of last season.

"There will be pressure on Hughes because he spent a lot of money at QPR and didn't do particularly well there," added Matteo, who now works as a sports ambassador for a Leeds law firm.

"There is a few bob at Stoke, but nothing compared to what he was given at Manchester City and QPR."

Ultimately, though, Hughes will not be judged by the players he buys or nurtures, but on his attempts to at least match the mid-table Premier League finishes that Stoke have become used to.

And, given the reasons for his predecessor's departure, the 49-year-old will also be judged on the manner in which results are obtained.

In replacing a man who has never been relegated in his managerial career, Stoke have arguably gambled what they have built over the past seven years in a bid for a more stylish future.

Many Britannia Stadium regulars called for Pulis's removal during the closing weeks of the season, but most of those fans also know the dangers of inflated expectations. "We don't want to do a Charlton," has often been heard in North Staffordshire since Pulis's departure, referencing the Addicks's slide following the departure of Alan Curbishley in 2006.

But Hughes for one is looking up, rather than down.

"Stoke have been in the Premier League for a number of years now and have the understanding of what it takes to win Premier League games," he said when addressing the media for the first time as Stoke boss.

"Sometimes you get labelled with a certain way of playing. I can only take the club forward as I know and my philosophy is to play football and make it entertaining for the fans who pay good money to come and see us.

"It's not a case of wiping away the hard work of previous seasons. I'd like to make them a little bit more offensive but we're not going to chuck the baby out with the bathwater."

Hughes's remit is a tough one - take over from one of Stoke's most successful managers and make changes to methods both on and off the pitch while also maintaining results.

But having returned to management six months after his dismissal by QPR, Hughes is determined to learn from the mistakes he made in his previous job.

"If I am honest, we all tried to run there before we could walk," said Hughes of his time at Rangers. "At Stoke it's about steady progress."

Most Stoke fans would probably settle for that.