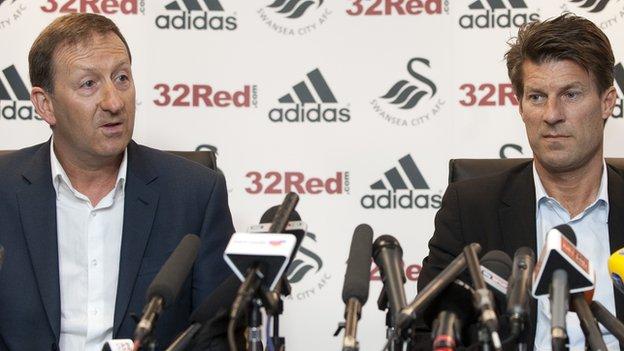 Swansea chairman Huw Jenkins has rejected reports of unrest over transfer funds that could prompt manager Michael Laudrup to resign.

Jenkins insists Laudrup will have "substantial" money to spend and is happy with the agreed transfer targets.

"It's disappointing that I have to respond to the speculation of unrest at the club after the fantastic season we have had," said Jenkins.

The statement from Jenkins came as Swansea confirmed Jose Canas will join.

Canas, 26, will arrive on a free transfer from Real Betis on 1 July after signing a pre-contract agreement. The deal was reportedly settled weeks before the end of the season.

Laudrup is eager to strengthen his squad further, and was given assurances by the board in March when he signed a new contract that he would be given money to spend.

He has not met Jenkins since the final game of the season, but the chairman insists no rift has developed between them.

"It is true that I have not sat down with our manager since the last game of the season against Fulham, but that's because we have both been away on holidays at different times," he said.

"It doesn't mean we haven't spoken because I've had numerous conversations with Michael over the phone and there's been no difference of opinion on our original transfer targets."

Laudrup guided the Swans to victory in the Capital One Cup in his first season at the Liberty Stadium, but suggested he needed to spend a "couple of hundred million pounds" on new players to improve on their ninth-place finish in the Premier League.

Jenkins, though, insists they will continue to adhere to the financial planning that has underpinned their 10-year rise from near oblivion to playing in English football's premier competition, and will not divert from the agreed budget for recruitment.

"Myself, the manager and our recruitment staff are all agreed on the quality of players we would like to sign to help us remain competitive in the Premier League," he said.

"We are continuing to work behind the scenes, in private wherever and whenever we can, to strengthen our squad.

"There are substantial funds available to strengthen our squad over the summer while we are also in the privileged position, because of the way we've managed our finances over the years, that we do not need to sell anyone to fund those new recruits.

"It goes without saying that some of our targets will sign for other clubs for different reasons.

"But that's the same for every club. The important thing, and a factor that has always been vitally important for us, is that we sign players who want to play for Swansea City for footballing reasons."