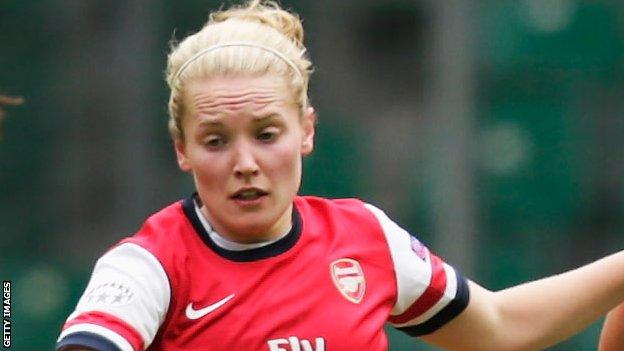 Arsenal completed a rapid hat-trick of wins against 10-player Bristol Academy with a 3-2 victory in an incident-packed Women's Super League game.

Academy finished the game a player short following the 76th-minute sending off of defender Grace McCatty.

Meanwhile, Doncaster Belles twice came from behind to draw 2-2 at Everton.

Arsenal had bossed the first half and both striker Ellen White and midfielder Jordan Nobbs had early efforts well saved by goalkeeper Siobhan Chamberlain.

But she could do nothing to stop Houghton's well-struck 32nd-minute angled drive that flew into the net.

Bristol's goal two minutes after the break came thanks to an error from Arsenal keeper Emma Byrne, who allowed Natalia's shot to slip through her hands into the net.

McCatty then saw red for bringing down White in the area, but Little's penalty was well saved by Chamberlain.

Yorston was more accurate with her spot kick, but despite the home side pressing in the final 13 minutes they could not force an equaliser.

All of the goals came in the second half, Everton taking the lead first through striker Nikita Parris and then substitute Chantelle Boye-Hlorkah.

But the battling Belles fought back on each occasion, first through central defender Victoria Williams with substitute Cheryl Foster's penalty earning a point.

Before opening the scoring, Parris had wasted a fine 23rd-minute chance, shooting wide after being sent clear by strike partner Simone Magill.

And a minute later it took a goal-line block from Toffees keeper Lizzie Durack to deny midfielder Millie Bright a goal.

Parris made amends for her first-half miss four minutes after the break, the striker brilliantly curling a 20-yard shot into the top corner of the net.

But Donny drew level in the 67th minute, Williams heading in following a corner from striker Beth England.

The home side regained the lead within two minutes as Boye-Hlorkah rose to head home from fellow sub Michelle Hinnigan's corner.

The Belles once again fought back, however, and after a 75th-minute foul on England, Foster netted the penalty to level it up.