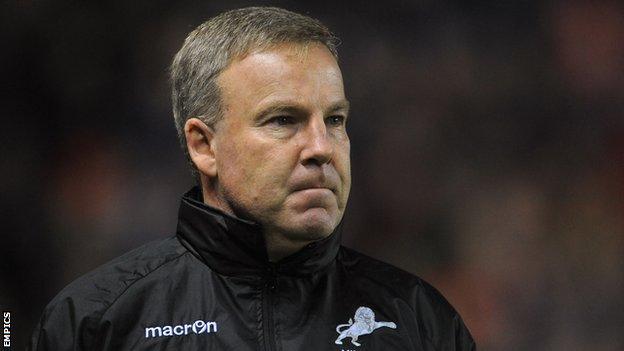 Kenny Jackett has been appointed as the new head coach of Wolves on an undisclosed contract.

The 51-year old, who recently resigned as Millwall boss, replaces Dean Saunders, who was sacked by the League One-bound club earlier this month.

Jackett, who led Millwall to the FA Cup semi-final this season, will be looking to arrest the decline at Molineux after two successive relegations.

Wolves have paid the Lions compensation for Jackett's services.

"I am both proud and delighted to have been appointed head coach at Wolves, and am really looking forward to the challenge ahead," said the former Wales international.

Jackett takes over a Wolves side who will be playing in the third tier for the first time since 1989.

Mick McCarthy was sacked in February 2012, when the club were already struggling in the Premier League relegation zone.

McCarthy's successor Terry Connor, his former assistant, then left after they dropped into the Championship.

Connor was replaced by Stale Solbakken in the summer, but the Norwegian was sacked in January, with the club sitting 18th in the Championship.

Saunders arrived from Doncaster, but the Welshman took 10 matches to earn his first win and the club were eventually relegated, after finishing in 23rd place.

This leaves Jackett with the task of attempting to get promotion back to the Championship, a feat he achieved as Millwall boss in 2010.

Jackett had spells as manager of Watford and Swansea before moving on to the Lions, but he left his post at The Den after six years in charge, on the dame day that Saunders was sacked by Wolves, stating that he felt the time was "right for a new challenge".