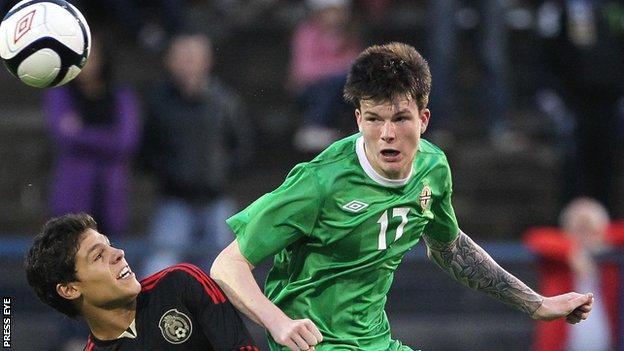 Wolves striker Liam McAlinden has become the latest player to switch allegiance from Northern Ireland to the Republic of Ireland.

The 19-year-old, who played for NI at youth level, follows players including James McClean to make the move.

Meanwhile, Middlesbrough midfielder Jordan Jones and Swansea forward Rory Donnelly do not wish to be considered for selection for Northern Ireland.

The trio had been named in the U21 squad to play Cyprus on Thursday night.

I think they've been in his ear and obviously family means a lot to a player, and he's chosen to go and try his luck with the Republic

"We've made these players feel very welcome, but ultimately it's their decision and now we must concentrate on the players who do want to play for Northern Ireland," Northern Ireland senior manager Michael O'Neill told the Sunday Life.

They took advantage of a ruling which allows players from Northern Ireland to choose which national side they represent, provided they have not played in a competitive senior international.

This ruling did not apply to McAlinden, who is English-born and had the option of playing for Northern Ireland, the Republic or England.

"Liam is a player who we had high hopes for and we've tried everything to keep him," added O'Neill.

"I even went down to meet Liam and his agent Stephen. Could you imagine Giovanni Trapattoni doing that?

"But that's what we need to do because we have such a small pool of players to choose from.

"Sadly for us the pull of the Republic was too strong. Liam qualifies for us through his grandfather born in Northern Ireland but most of his family are from the Republic.

"I think they've been in his ear and obviously family means a lot to a player, and he's chosen to go and try his luck with the Republic."

It is believed Jones, born on Teesside, wants to play for England while the international intentions of former Cliftonville forward Donnelly are unclear.

"He hasn't ruled anything out in the future and certainly hasn't closed the door on playing for Northern Ireland," said Donnelly's agent Gerry Carlisle.