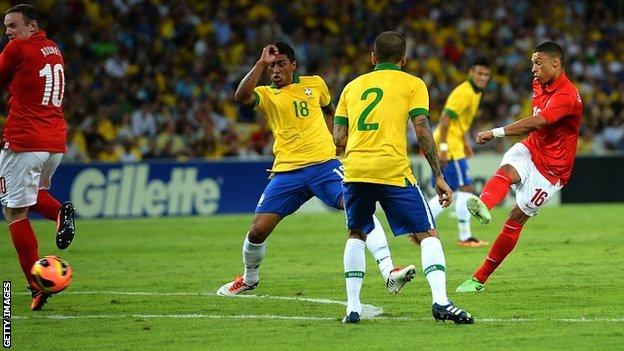 England came close to leaving Brazil's iconic Maracana home with an unlikely victory - only to be denied a repeat of their win here 29 years ago by Paulinho's late equaliser.

Goalkeeper Joe Hart produced a magnificent display to single-handedly keep Brazil at bay in a torrid first half when their latest young superstar Neymar tormented a poor England.

The defiant Hart produced a series of superb saves as Brazil ran England ragged, backed by the traditional fervour of fans revelling in watching their side play in this renovated stadium.

Brazil looked on course for victory when Fred put them ahead after the break but substitute Alex Oxlade-Chamberlain enjoyed a golden moment he will treasure forever when he powered home a fine equaliser.

The Arsenal teenager's father, former Stoke City winger Mark Chamberlain, played in the Maracana when England secured a famous 2-0 win on their last visit in 1984.

And the fanatical Rio crowd feared the modern-day Brazil were going to suffer a similar fate when Wayne Rooney's deflected 25-yard shot gave Roy Hodgson's side the lead with 11 minutes left.

Paulinho cut short England's hopes of ending their season with a landmark, if undeserved, win with a fine volley - but they can still take credit from battling through a period when they were outclassed by Brazil to come away with a draw.

This was a night when Brazil's new home was put on show and this entertaining friendly did it justice, although the locals were understandably disappointed by the eventual outcome.

The new Maracana may have lost some of its unique appearance but the name still has the old mystique, with Rio's statue of Christ The Redeemer looking down from the hills overlooking the stadium.

And for England's players fed on tales of the Brazilian greats such as Pele, Garrincha and Jairzinho, simply to play in the arena bearing the famous name - even in its modern guise - will be a special memory, especially for Hart and Oxlade-Chamberlain.

The exterior of the stadium, and indeed parts of the interior, is still very much a work in progress and led to brief fears that this game may not materialise after it was suspended on Thursday amid safety fears.

The searing temperatures in South America provided another test for England's somewhat depleted squad to conquer at the conclusion of a long season.

This remains one of the great temples of football and huge surges of noise swept around the Maracana every time Brazil threatened, with Leighton Baines blocking an early acrobatic effort from Neymar, and Dani Alves shooting just wide from long range.

Neymar was the orchestrator supreme, often to the frustration of his team-mates, who waited for a pass that never came, and he teased England throughout the first half.

It was developing into a personal battle with Hart and the keeper won when Neymar controlled Alves's pass after a slip by Glen Johnson. He then made a brave double save, diving at the feet of Hulk and Filipe.

Neymar then curled another shot just off target before England's under-pressure defence suffered a blow when Baines limped off to be replaced by Ashley Cole.

England, who had barely entered the Brazilian danger zone, then had a clear opening but Walcott's shot following Johnson's fine pass was saved by Julio Cesar. To say this would have been against the run of play would rank as a masterpiece of understatement.

The visitors at least enjoyed some rare moments of possession after the restart but the goal Brazil had threatened came after 57 minutes when Fred hooked home, making a difficult finish look deceptively easy after substitute Hernanes's shot had bounced back off the bar.

And Oxlade-Chamberlain's time arrived after 67 minutes when Rooney headed Lampard's ball into his path and he drilled a powerful low finish past Cesar.

England, remarkably given what had gone before, then took the lead with 11 minutes left as Rooney cut inside and saw his shot deflected off Fernando past Cesar.

It was a lead they held for only three minutes as Paulinho showed superb technique to volley Lucas Moura's cross beyond Hart.