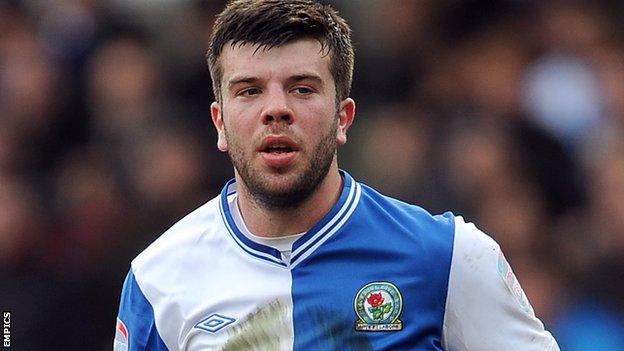 Blackburn Rovers defender Grant Hanley has signed a new five-year contract, keeping him at the club until 2018.

The 21-year-old Scotland international has played 83 times for the club since his debut in 2010, scoring five goals.

"It is vitally important that we keep hold of our young, homegrown talent, who the supporters can identify with.

"He epitomises what we are about; hard working, committed to the cause and prepared to put his body on the line," boss Gary Bowyer told the club website.

I heard that the club wanted me to sign a new deal, I couldn't wait to get it done

"I have been delighted with Grant's progress from the youth team to the first team and this new contract is richly deserved after a superb season for the club."

Centre-back Hanley made a name for himself by scoring the winner in a 3-2 victory at Manchester United in 2011 and netted his first international goal in Scotland's 2-1 home defeat by Wales in March.

"As soon as the end of the season came and I heard that the club wanted me to sign a new deal, I couldn't wait to get it done and it feels brilliant," Hanley said.

"I've been at the club for a while now, it's a great club and I'm really happy to extend my stay here."