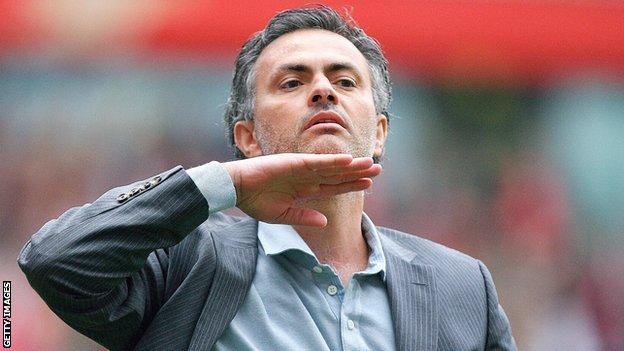 Jose Mourinho arrives back at Chelsea riding a wave of goodwill and carrying a historical significance inside Stamford Bridge that affords the special status he awarded himself when he first walked through its doors.

If the interim appointment of the unpopular Rafael Benitez was owner Roman Abramovich reminding Chelsea's fans who calls the shots, the return of Mourinho is a case of giving your public what they want.

And what Abramovich wants is for the 50-year-old Portuguese to build on Chelsea's Europa League success and deliver an era similar to his silver-lined first spell between 2004 and 2007, when he brought the title to Stamford Bridge for the first time in 50 years and repeated the feat 12 months later.

Mourinho says he is walking back into an environment where he is loved - but what will he find in his "in-tray" as he tries to make it even better second time around?

He will rediscover a squad that still has that inner steel, an automatic default response to pressure that Mourinho built in, allowing them to win the Champions League and Europa League from situations where they seem to be suffering.

But this is also a team that needs attention - and a club where the delicate balances of power between Mourinho and Abramovich must be pitched perfectly to survive for any length of time.

Mourinho will still have the reliable and influential figure of Petr Cech in goal, while the decision to award Frank Lampard a new one-year deal will have met with the full approval of a coach who still recognises the 34-year-old's influence.

But what will Mourinho make of John Terry, and will the veteran, increasingly susceptible to injury, be deemed worthy of a place in any reconstructed Chelsea?

Mourinho builds his teams on strength, solidity, reliability and tactical discipline. Terry's fragile fitness means he does not sit easily in any of these categories.

David Luiz, the talented maverick, may also be vulnerable. He is not exactly Mourinho's identikit defender, but the incoming manager may feel the Brazilian possesses such a rare talent he can be moulded. On the other hand the prospect of raking in a huge transfer fee, perhaps from Barcelona, may be tempting.

Mourinho will inherit England's Gary Cahill and has Branislav Ivanovic at his disposal, while he has been linked with Porto's highly-rated 22-year-old Eliaquim Mangala.

Ashley Cole remains an outstanding left-back at 32 but even this is a situation Mourinho may feel he needs to address for the long term. He will have no worries about Cole when he first arrives but his renowned attention to detail means Mourinho will also be looking into the future.

Ryan Bertrand has shown promise but Real Madrid's Fabio Coentrao may be a contender - and Chelsea are more than aware of Southampton's exceptional 17-year-old Luke Shaw. Expect them to try and force their way to the front of the queue at any hint of a sale.

Mourinho's pragmatic but successful style will make intriguing viewing given the artistry provided by Chelsea's "Three Amigos" - Juan Mata, Oscar and Eden Hazard - as he has always liked having a powerful base to his midfield.

He has already been linked with Luka Modric, another diminutive creator, who he brought to Real Madrid from Tottenham, and Everton's Marouane Fellaini. Fellaini's contract contains a clause which means he can be secured for around £24m and the giant Belgian has a preference for a holding midfield role rather than as an attacking force, where he was used by David Moyes for much of last season.

In his last spell at Chelsea, Mourinho built the attacking threat around the menacing presence and power of Didier Drogba. On occasions, Romelu Lukaku performed like a young Drogba in the making on loan at West Bromwich Albion and Mourinho will be seeking reports from his former right-hand man Steve Clarke, now manager at The Hawthorns, as well as making his own judgements.

Whether Fernando Torres, rejuvenated to an extent under Benitez, makes the cut remains to be seen but Chelsea will be aware they would take a hefty hit on the £50m they paid Liverpool should Mourinho decide he does not fit his bill.

Bayer Leverkusen's Germany forward Andre Schurrle is expected to sign for Chelsea imminently in a deal worth a reported £20m and it would be no surprise to see Mourinho boost his somewhat threadbare striking options even further with another high-profile signing.

The relationship between Abramovich and Mourinho had fractured by the time he left Chelsea but has been repaired over time to such an extent that the Russian now feels comfortable enough to be reunited - and his reappointed manager feels happy enough to accept his offer.

Abramovich and Mourinho have not had to exercise much in the way of compromise in their careers but there may have to be an element in this renewed partnership.

The intervening years may well have taught both that they are best for each other. As stated here recently, this is not exactly a case of "can't live with but can't live without" but the dynamics of how they work together will be pivotal to the relationship's chances of success and harmony.

There may need to be a concession of some power on both sides, something both may find hard to do. It is hard to imagine Abramovich handing too much control to a manager who craves it. All this would have had to be worked out before the final touches were applied to Mourinho's comeback.

As ever, Mourinho will be box office and the Premier League will be richer for his presence - especially with a packed agenda as he attempts to take the title back from Manchester United.