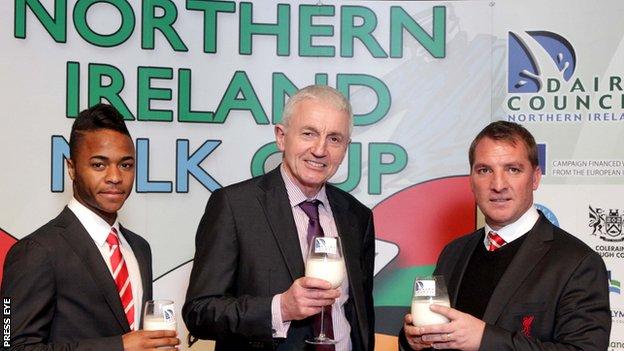 Drumahoe will stage two games in the Milk Cup this year to help Derry celebrate its city of culture status.

Liverpool and Northern Ireland will be the star attractions at the Londonderry venue, which is home to Institute FC.

Liverpool face County Armagh in the Premier Competition on Monday 29 July with the Elite game between Northern Ireland and the USA two days later.

It is the first time Milk Cup organisers have staged matches in the Derry City Council area.

Northern Ireland manager Michael O'Neill is urging supporters to come out and back the national side at the Riverside Stadium on Wednesday 31 July.

He said: "We have always received terrific support for our teams at the Milk Cup and I believe this gives football supporters in Derry and the surrounding region a great opportunity to see some of the stars of the future right on their doorstep".

"I hope football people come out and enjoy both games.

"I know Liverpool are a big draw even at Under-17 level. In years gone by players such as Robbie Fowler and Steve McManaman played in the Milk Cup."

Milk Cup chairman Victor Leonard explained organisers of the UK City of Culture celebrations and Derry City Council approached Milk Cup chiefs to see if they would consider the move.

"We felt that if it was thought we could help enhance the already extensive programme of events, then we would endeavour to answer the call," Leonard said.

Institute President Charles Ferguson said: "this is another important milestone for our club".

"We have seen major development of our facilities in recent years and we believe we have the ideal venue to host such prestigious games."

The Milk Cup's welcome parade of participating teams begins at the Diamond in Coleraine on Sunday 28 July with finals' night on Friday 2 August at Ballymena Showgrounds.

The event will be covered extensively on BBC Sport NI.