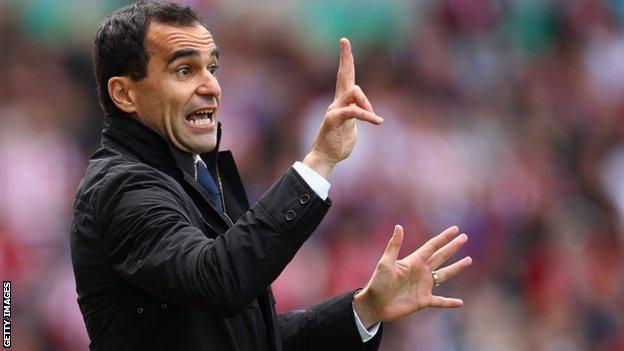 Everton chairman Bill Kenwright has overseen plenty of successful auditions throughout his career as a theatre impresario - but one of the most important took place at Goodison Park in March.

In the context of Everton's most painful moment of the season, manager Roberto Martinez made an indelible impression as Wigan Athletic completed a comprehensive 3-0 FA Cup quarter-final victory.

The goals came inside three minutes of first-half mayhem, but the stylish manner of Wigan's win made plenty inside Goodison Park sit up and take notice.

It also helped Wigan take another significant step towards their eventual FA Cup final win against Manchester City at Wembley last month to claim the first major trophy in the club's 81-year history.

The highest high was replaced by the lowest low within days as defeat at Arsenal relegated Wigan from the Premier League - but by then Martinez had major trophy success against his name, and his reputation was untarnished by the drop into the Championship.

The FA Cup win also made Kenwright's job easier as he pondered the pursuit of the 39-year-old Spaniard, who was always the club's first choice from the moment David Moyes was announced as Sir Alex Ferguson's successor at Manchester United.

Kenwright considered internal candidates such as Phil Neville, David Weir and Alan Stubbs, and thought was given to European coaches such as Porto's Vitor Pereira and Red Bull Salzburg general manager Ralf Rangnick.

But once Martinez told his disappointed chairman Dave Whelan he wished to leave Wigan, there was a sense of inevitability that Everton would be his next stop.

Confirmation came with Whelan's revelation that he had agreed a compensation deal with Kenwright - and Martinez will begin the job of taking Everton forward after 11 years in the care of Moyes.

There has been some scepticism among Everton's fan base but, crucially, Kenwright will be able to sell Martinez as a winner of silverware - something Moyes was unable to achieve despite the plaudits his work received - rather than as a manager who has just been relegated.

Martinez has been coveted for some time and regarded by many as a bright, young visionary manager, turning down Aston Villa in 2011 and being publicly courted in the United States by Liverpool owner John W. Henry 12 months ago before the Anfield job went to Brendan Rodgers.

And yet, for all his admirers, there are plenty who ask valid questions of his record.

If he is a manager of such gifts, why has he been a consistent battler against relegation? In four seasons in the Premier League he has finished 16th, 16th, 15th and finally a relegated 18th last term. He has won 38 out of 152 games in the top flight with a win ratio of 25%.

These do not necessarily add up to the credentials to take the managerial post at one of the great names of English football, albeit a club that may just have hit the glass ceiling in terms of Premier League position with a sixth-place finish under Moyes last season.

Martinez might have heard those questions being asked and now he has a much bigger platform and profile to support the words of those who regard him so highly and deliver the answer to those who suggest he is more style than substance.

Wigan chairman Whelan has been a passionate advocate of Martinez, insisting he is destined for managerial greatness and even suggesting when his name was initially linked with Everton that they may not be big enough for him.

Martinez has also had to work within a stringent financial framework at Wigan, and some of his good work this season was undermined by injuries in key areas. Martinez cut Wigan's wage bill and also lost his major attacking talents, such as Charles N'Zogbia and Victor Moses, in past seasons.

There was criticism of his failure to cure Wigan's defensive problems but he will find Everton captain Phil Jagielka, Sylvain Distin, Leighton Baines and the ever-improving Seamus Coleman already in place and established as a very familiar unit.

Martinez is a charismatic figure, immensely popular within the game and with the media who deal with him on a regular basis, and a key element of his appeal to Everton and Kenwright is his insistence on an attractive, free-flowing, positive style.

If he gets this right at Goodison Park, there are few arenas in the Premier League where this approach will be more warmly embraced.

Kenwright will not be able to give Martinez a massive budget but, as with Moyes, he will give him the control he craves to create what he will believe is the right environment - and Everton believe they have an attractive package in place for Moyes' successor.

They feel the new broadcasting deal offers them a level of financial stability they have not enjoyed for years, while Martinez will inherit a small but talented squad filled with fine players. He will have plenty of good material to work with.

There is always the possibility he will lose Belgian midfielder Marouane Fellaini, who has been linked with Chelsea and has a buy-out clause of around £23m in his contract. If it is activated, and once a percentage is paid to former club Standard Liege, Martinez will have around £20m to use in the transfer market.

High earners such as Phil Neville and, somewhat surprisingly, former reserve goalkeeper Jan Mucha are off the wage bill, while Martinez may also be able to rake in a few million for defender John Heitinga, who is on a reported £60,000-a-week.

Martinez may even start putting his stamp on things by making a return trip to Wigan in an attempt to sign a couple of new faces from a list of talents such as boyhood Evertonian Callum McManaman, Arouna Kone, James McCarthy and Shaun Maloney. Not all, of course, but there may be at least one ex-Wigan player in Everton's line-up at the start of next season.

Kenwright was determined to be painstaking and detailed about his search for Moyes' successor but he may also have had a gut instinct about Martinez and Everton being a perfect fit.

He will hope, as he did so emphatically with Moyes, that he has made the right choice.