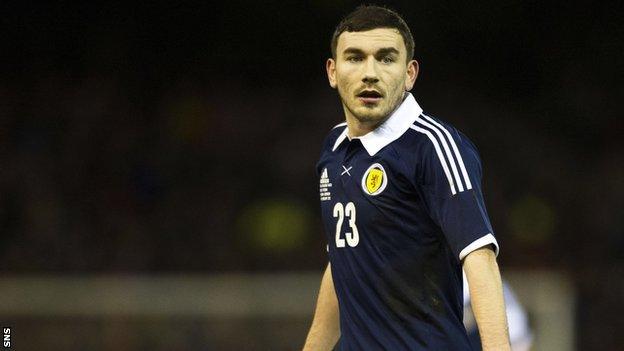 Scotland midfielder Robert Snodgrass has insisted that pride is the only motivation needed to get a result against Croatia.

The hosts top World Cup qualifying Group A with Belgium while the Scots sit bottom without a victory ahead of Friday's match in Zagreb.

"I think the table says it all. We are down at the bottom, they are fighting at the top," he said.

"But there is a level of pride at stake and a belief that we can get a result."

And Snodgrass maintained that the Scots would not be turning up if they did not think themselves capable of getting something from the match.

"I would hate to be in a changing room with lads that didn't believe they could win a game," he said.

People might think differently, but I think we should have beaten Wales home and away and we could have got a better result against Serbia

"It is a matter of pride. Most footballers I know want to win every training session never mind games and that's what it will take to get a result there on Friday."

The Norwich City midfielder was also quick to defend the Scots despite poor World Cup results.

"We have been very unlucky during this campaign," he insisted.

"People might think differently, but I think we should have beaten Wales home and away and we could have got a better result against Serbia.

"We are where we are because we didn't take our chances, so we will try to put those things right come Friday."

Snodgrass also insisted the Scotland fans had not seen the best of his club-mate, Russell Martin.

"He's a top professional, a top athlete and most of all, he is a top player," he said.

"I have seen him day in, day out and he is a leader and a winner and that's what you need."

The 25-year-old also gave his thoughts on being reunited with former Livingston team-mate Leigh Griffiths, also called up to the Scotland squad.

"I watched him in training this week and he has not changed much from when he was younger," said Snodgrass.

"He was shooting from everywhere then, every angle possible, and he still does the same.

"He wants to score goals and that is a great thing to have in your locker."

However, Snodgrass revealed that Griffiths, who was on loan at Hibernian from Wolves last season, appeared calmer than when they had shared a dressing-room as teenagers.

"He has probably grown up a lot from then," he said. "He was a young boy then, but he has kids now, he is a dad.

"Nothing fazes Leigh. He has said that he wants to play for Scotland, so hopefully he gets the chance and does the business."