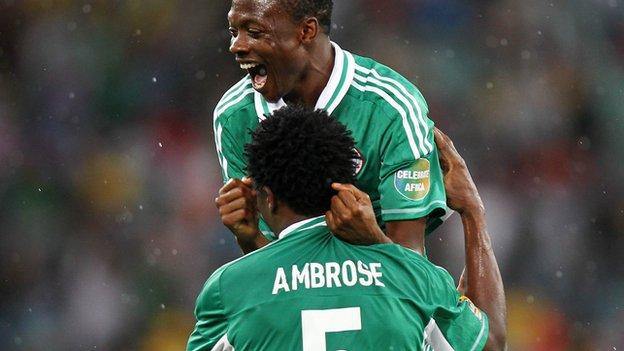 Nigeria boosted their chances of reaching the 2014 World Cup by beating Kenya 1-0, while Malawi were held by Namibia in Wednesday's qualifiers.

Ahmed Musa scored the only goal in the two Group F games, sending Nigeria two points clear at the top of the table with two rounds of matches remaining.

The Super Eagles went into the match level on points with Malawi, leading the Flames only on goals scored.

And it had looked as though nothing would change in the group after Malawi and Namibia drew 0-0 in their match, and Kenya were still on level terms with the African champions after 80 minutes in their game, which kicked off half an hour later.

But striker Musa latched on to a long ball from Efe Ambrose and flicked an audacious lob over Kenya keeper Duncan Ochieng to earn Nigeria a victory that could prove crucial in the race to reach Brazil.

Malawi will reflect on a chance missed by Esau Kanyenda, who hit the woodwork with a header - also in the 80th minute of the match - and their failure to see off Namibia has dented the Flames' hopes of reaching their first World Cup finals.

Nigeria will progress to the next stage of qualification next Wednesday if they beat Namibia and Malawi fail to beat Kenya, who are almost certainly out of the running.