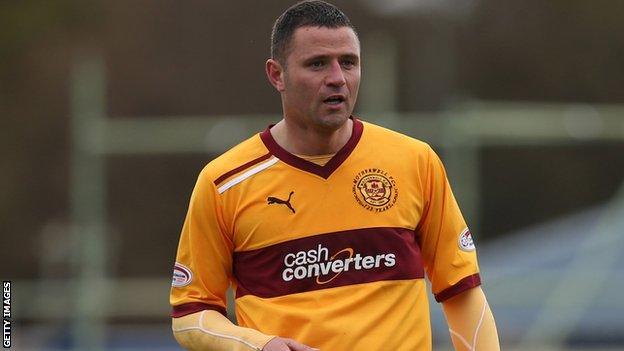 Barnsley have revealed they have submitted an offer to Motherwell striker Michael Higdon.

The 29-year-old, who was the top scorer in the Scottish Premier League last season with 26 goals, is out of contract with the Fir Park club.

Outgoing chief executive Don Rowing told BBC Radio Sheffield: "We have an interest in Michael and we've made an offer through his agent.

"Anyone who can score goals at whatever level is always on the radar."

He continued: "We've been one of the first clubs to step in and hopefully we'll be the ones that get him, but we've had no response at the moment."

The former Crewe, Falkirk and St Mirren man won the PFA Scotland Player of the Year award last month and has been offered a new deal by the Steelmen.

Meanwhile, Rowing, who is retiring at the end of the month, confirmed the club are hopeful of tying up deals for Sheffield Wednesday striker Chris O'Grady and unattached forward Jon Stead.

O'Grady, 27, scored six goals in 16 appearances while on loan at Oakwell last season and helped the Tykes retain their Championship status on the final day with a 2-2 draw at Huddersfield.

Stead, 30, is a free agent after being released by Bristol City following their relegation to League One.

"We're not too far away with Chris and we're very hopeful that common sense will prevail," said Rowing.

"Hopefully something will be done with that in the next couple of weeks because we want him into the club.

"I've spoken to Stead's agent and we've discussed certain options. It's up to him now if he wants to do that."