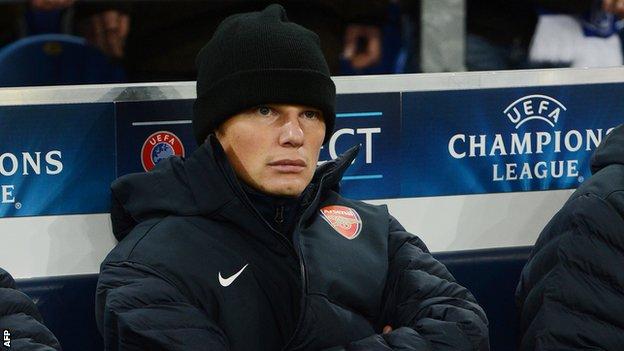 Andrey Arshavin, Denilson and Sebastien Squillaci will leave Arsenal at the end of June when their contracts expire.

The trio have struggled to feature in recent seasons, with playmaker Arshavin, 32, and midfielder Denilson, 25, both spending time away on loan.

Arshavin, who signed from Zenit St Petersburg for a reported £15m in 2009, is the most high-profile departure.

While he made 11 appearances this term, defender Squillaci, 32, played in one Champions League match at Olympiakos.

The former France international joined the Gunners from Spanish side Sevilla for an undisclosed fee in 2010, featuring in only 23 Premier League fixtures during a three-year spell.

Brazilian Denilson was brought from Sao Paulo in 2006, but spent the last two seasons back at his former club on a temporary basis after previously making 156 appearances while with the north London outfit.

For Arshavin, whom manager Arsene Wenger predicted in April was set to leave, he scored 31 times in 144 games for Arsenal.

He had appeared to have settled quickly following his January transfer four years ago, scoring all of the Gunners' goals in a 4-4 draw away at Liverpool the following April.

He netted 22 times over the next two campaigns, but only twice in 2011-12 before being loaned back to Zenit in February 2012.

His only strike this season came in Arsenal's 6-1 win over Coventry City in the League Cup last September.

329 comments
Back to top
unknown