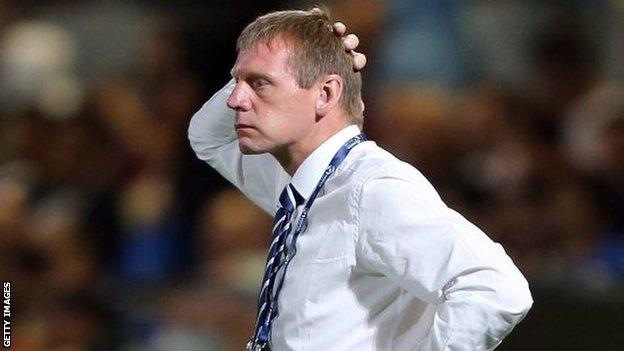 England Under-21 manager Stuart Pearce called his side's performance in the "awful".

England had a goal ruled out for a foul before Lorenzo Insigne curled in a late free-kick to give Italy a deserved win in their European Under-21 Championship opener in Tel Aviv.

Pearce said: "The performance was very poor. The players know that it wasn't good enough, the better team won.

"The positive is we played that badly and only lost 1-0. We were awful."

England were England, they defended and worked hard for each other but lacked inspiration. They were short of two or three players, but when they did have efforts at goal they were not too clever.

Pearce's side came into the tournament on the back of a nine-game unbeaten run, stretching back to November 2011, during which they had not conceded.

England had a goal from central defender Craig Dawson disallowed but they rarely threatened and were fortunate not to concede a first-half penalty when Liverpool's Jack Robinson took out Alessandro Florenzi.

"They caused us problems all night. We didn't get any performances from our bigger players," said Pearce.

"We were well beaten and we can't grumble. We were stagnant and we had nobody running in behind [Italy's defenders].

"It took a long time to disallow the goal and I'm not sure what it was for. But I can't bleat about that because Italy should have had a penalty.

"I'm not angry - you can't go stomping and shouting in the dressing room. The result has gone, we have two days before we play again so it's important that we get the players in the right mentality and inspire a better performance.

"We will need to win both games now but that's tournament football, it's unforgiving."

England take on Norway on Saturday, before they end their Group A campaign against hosts Israel on Tuesday, 11 June.