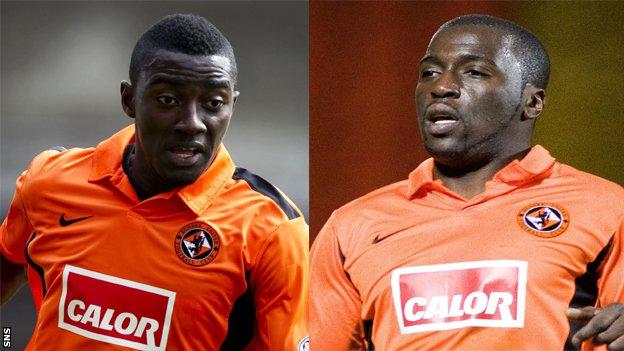 Rangers are interested in signing ex-Dundee United midfielder Morgaro Gomis and his former team-mate Prince Buaben, according to the players' agent.

Ladi Salami has told BBC Scotland that he has also discussed potential moves for the duo to Aberdeen and Hearts.

Both players were signed for United in 2007 by Craig Levein.

Gomis left Tannadice to join Birmingham City in 2011, while Buaben moved to Watford after almost four seasons on Tayside.

Gomis and Buaben are now free agents and Salami told BBC Scotland that he has opened discussions with the Ibrox club, but had also been entertaining interest from England.

"I have spoken to Ally McCoist about them," said Salami. "Aberdeen and Hearts are also interested. The clubs know them well from their time in Scotland.

"There is also interest from Championship clubs. I expect something to happen in the next two weeks. The players want it all sorted before pre-season training starts."

Aberdeen may have enquired but the recent signings of central midfielders Willo Flood and Barry Robson make any further additions in that area unlikely.