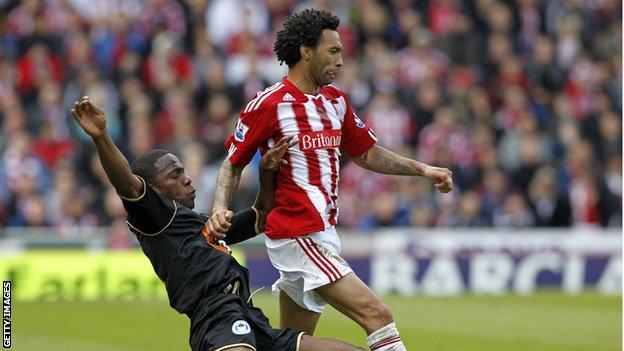 Stoke have also announced six departures from their backroom team.

Stoke appointed Hughes last week following the departure of fellow Welshman Tony Pulis - and it has already been reported that he would be joined by his regular backroom team.

"His long throws helped to propel the club into national and global sporting headlines and his unique ability helped Stoke to memorable wins over the likes of Aston Villa, Arsenal and Manchester City."

Former England captain Francis had worked for Stoke in a coaching role since 2008, while Kemp, 60, ends an association with Stoke lasting back to 2004 when he was appointed as first team coach by Pulis in 2004.

He left when Pulis departed the Britannia Stadium in 2005, following him to his former club Plymouth Argyle, before returning to the Potters under Pulis in October 2006, since when, apart from a season as chief scout following the arrival of Peter Reid, he has been his number two.

Former Arsenal winger Pennant, 30, who was once a £6.7m signing for Liverpool and played in the side beaten 2-1 by AC Milan in the 2007 Champions League final, joined Stoke from Spanish side Real Zaragoza.

He initially joined on loan, in 2010 and played in their FA Cup final defeat by Manchester City in 2011.

But he made just two appearances for the Potters last season - both in August - and spent three months of the campaign on loan with Wolves in the Championship.

Midfielder Whitehead, 31, was a regular squad member under Pulis but made just 12 Premier League starts in his final campaign at the Britannia Stadium.

Former Republic of Ireland international Delap was a key member of the Stoke team during their early seasons in the top flight.

His long throws became a feature of their game but, after falling out of favour, he joined Barnsley on loan in January.

Upson was another player who was loaned out in January, the defender playing 21 times for Brighton.