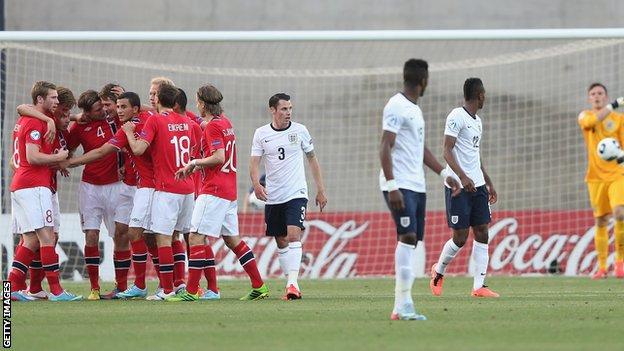 England were knocked out of the European Under-21 Championship at the group stage after a demoralising defeat by Norway in Israel.

Stuart Pearce's side, who lost their opening game 1-0 to Italy, fell behind to Fredrik Semb Berge's neat 12-yard finish, and Molde's Jo Inge Berget doubled the lead before the break.

Magnus Wolff Eikrem made it 3-0 off the underside of the crossbar.

"Quite clearly we have failed to make an impression. We came into the game with big hopes with Ince and Zaha in the team to give us the extra ammunition needed and to dribble to create chances. Norway defended well and they scored at vital times. It has been very disappointing and England haven't done themselves credit at all."

Craig Dawson netted a consolation from the penalty spot after he was fouled.

It was a bitterly disappointing outcome for coach Pearce, who had stated before the tournament that he had a "burning ambition" to win the Championship ahead of talks on his own future.

Instead the former Manchester City manager, whose contract expires this month, watched his team wilt in the sweltering heat in Petah Tikva.

The road to Israel had been built on a solid defensive foundation.

Yet in front of watching senior manager Roy Hodgson at the Ha Moshava Stadium, England were punished for some dreadful defending at the back.

They had started the game determined to put behind them the disappointment they experienced at the hands of Italy in Tel Aviv three days earlier.

But they ended the match defeated and dejected after exiting the European Championship at the group stage for the second successive tournament.

Not even the return of Manchester United's Wilfried Zaha and Blackpool's Thomas Ince, back in the side after injury and suspension respectively, could lift Pearce's class of 2013, who will return home after Tuesday's third and final group game against hosts Israel.

Having gone almost 900 minutes without conceding before the tournament, goalkeeper Jack Butland found himself fishing the ball out of his net for the second time in 26 minutes of action.

England conceded in the 79th minute against Italy in the opening fixture and on Saturday Norway did not look back after taking a 15th-minute lead.

The opener came shortly after Danny Rose had headed an excellent chance over the bar from a Jordan Henderson free-kick.

It was a costly miss by the Tottenham player, with the Scandinavians, competing in their first European Championship since 1998, twice punishing sloppy England defending before half-time.

Semb Berge's low right-foot finish on the spin from 12 yards came after Pearce's side had failed to deal properly with a corner.

It was 2-0 in the 34th minute, a fine looping pass over the top by Havard Nielsen allowing Berget to find space between Steven Caulker and Dawson before shooting past Butland with his left foot.

England fell 3-0 behind when former Manchester United youngster Eikrem hammered the ball off the underside of the crossbar after Marcus Pedersen had cut the ball into his path in the 51st minute.

Since losing 4-0 to Germany in the 2009 final in Sweden, England have taken just two points from five games at the European Championship

England did manage their first goal of the tournament when they were awarded a 57th-minute penalty after Dawson was held back by Norwegian goalscorer Berge, and the West Brom defender made no mistake from the spot.

But Pearce's team, who had beaten Norway twice in their qualifying group, were a shadow of the side that had comfortably booked a place in the finals.

Having started the match with purpose, they quickly lost their way. Apart from Rose's early chance, Dawson's penalty and a Henderson long-range effort in the early stages of the second half, England struggled to trouble the Norwegian defence.

By the end they were playing hopeful long balls into the opposition box which the Norwegians comfortably cleared.

In the day's other game in Group A, Italy booked their place in the semi-finals with a comfortable 4-0 win over hosts Israel.

Manolo Gabbiadini then buried two powerful left-footed shots before Alessandro Florenzi wrapped up the win with a fine solo goal.