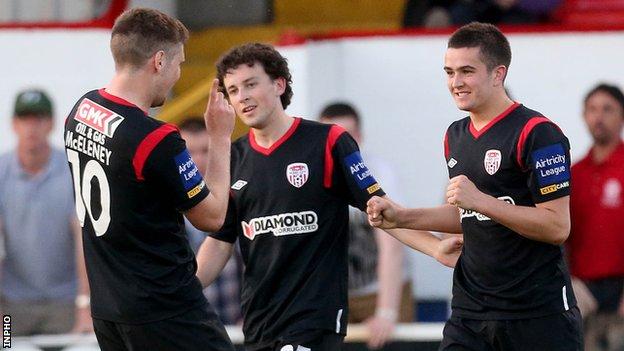 The Candystripes are six points behind St Pat's but have a game in hand.

Shelbourne should have gone ahead in the 13th minute when Mark Leech crossed for Robert Bayly who completely missed the ball, which fell for Kelly for the simplest of chances from five yards, but the striker blazed over embarrassingly.

Seven minutes later, Sean Brennan did well to beat his man and play a one-two with Kelly, but tamely hit his shot straight at Gerard Doherty with the Derry keeper having already committed.

The visitors had to wait until just before the interval before creating any clear opportunities when Duffy headed agonisingly wide before curling an excellent effort off the upright moments later - Patrick Kavanagh blazing the rebound wide.

The Candystripes were rewarded for a better start to the second half after 63 minutes when Rory Patterson found the impressive Duffy, who seemed to have been pushed too far wide but produced a slick finish in off the crossbar from a tight angle.

Johnny McDonnell must have thought he had his first point - and goal - as Shelbourne manager when the ball fell to Kelly ten yards out, but his fierce strike was expertly turned away by McBride.

With the hosts pushing for an equaliser, substitute Mark Griffin should have doubled Derry's lead following a mix-up between goalkeeper Niall Burdon and Jack Memery but lobbed wide.