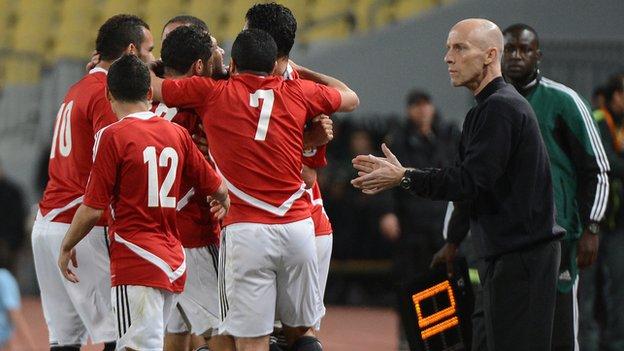 Egypt could secure a place in the next round of African qualifying for the 2014 World Cup if they beat Zimbabwe on Sunday.

The Pharaohs have a perfect record in Group G and hold a five-point lead at the top of the table, meaning they will take a step closer to Brazil if they win their match and second-placed Guinea fail to beat Mozambique in the group's other game on Sunday.

The seven-time African champions have been hindered by political upheaval at home over the last few years and they were missing from the African Cup of Nations this year and last.

Bob Bradley's side are hoping to wipe away two years of pain for the country's game and put it back at football's top tournament for the first time in over 20 years.

However, they will be without Mohamed 'Geddo' Nagy who has a nagging foot injury and they also must rediscover their best form after an experimental Pharaohs side were held 1-1 by Botswana in Cairo this week.

Even if they safely negotiate their way our of the group, Egypt would still face a tough task before they obtain their ticket to Brazil.

The 10 group winners have to face off in decisive two-legged playoffs to be one of Africa's five countries at the World Cup, a change that means the trip to Brazil will ultimately hinge on one tie and not a prolonged group competition like last time.

A slip there and a team loses everything.

"Qualification in Africa is difficult,'' Bradley said. "That home-and-away tie against another group winner. There will be no margin for error.''

The next two rounds of qualifiers feature 40 games packed into 11 days, leaving just one more group date in September before the play-offs.

Cameroon take on Togo in Lome on Sunday, with Volker Finke in charge of his first competitive game since he replaced Jean-Paul Akono.

The German will be eager to get off to a winning start but he will be without striker Samuel Eto'o, who was injured playing for Russian club Anzhi Makhachkala.

Algeria and Mali are locked in a battle at the top of Group H, both on six points.

The Desert Foxes lead the group on goal difference and face third-placed Benin on Sunday.

Mali take on Rwanda later the same day, with both sides playing their first game under a new coach. Mali will be led out by Pathe Diallo, who steps ups from his post as assistant following the departure of Patrice Carteron, while Eric Nshimiyimana takes the helm for Rwanda.