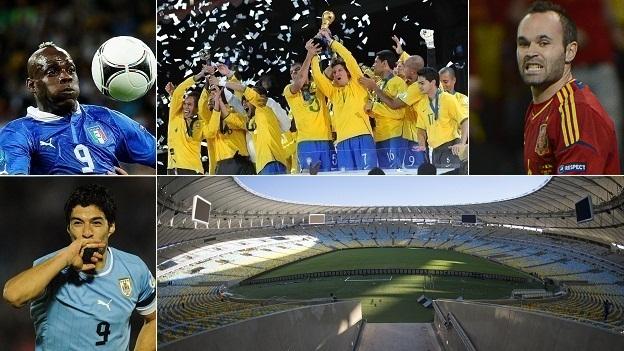 With the 2014 World Cup less than a year away, all eyes will be on Brazil over the next fortnight as they stage a dress rehearsal for next year's main event.

Among the eight participating nations in this year's Confederations Cup, which starts on Saturday, are some of the world's best footballers as they compete over 16 matches and six different venues to give a glimpse of what is in store in Brazil 2014.

From world champions Spain, to goal-line technology, to the romance of Tahiti's involvement, the tournament will be sure to attract the attention of football fans across the world.

The Confederations Cup has brought together the world and continental champions since the 1990s, but its origins can be traced back to a tournament that was once very different.

Now, the competition takes place every four years and features the reigning champions of the six confederations that make up Fifa, with Spain travelling as representatives of European governing body Uefa.

The final two places are taken by the World Cup holders, plus the next hosts, although with Spain the reigning world and European champions, Euro 2012 runners-up Italy have been invited as the eighth team.

In 1980, Uruguay hosted the Copa D'Oro, also known as the Little World Cup, to celebrate the 50th anniversary of the World Cup, which had also been held in Uruguay. The six winners of the World Cup were all invited, with only England declining the invitation. Their place was taken by the Netherlands, World Cup runners-up in 1974 and 1978.

The next attempt at a global competition outside of the World Cup was the Artemio Franchi Trophy, contested in 1985 and 1993 between the winners of the European Championships and the Copa America and named after the late Uefa president.

By then, the Confederations Cup had already been born in all but name. The first King Fahd Cup, named after Saudi Arabia's leader, was held in the Arab state in 1992 and is recognised by Fifa as the first staging of the current tournament. It was played between the Saudi national team and three continental champions: Argentina, USA and Ivory Coast. Three years later, the European and Asian champions also took part to swell the number of teams to six.

In 1997 Fifa became the organisers of the renamed Confederations Cup. It took place biennially but since 2005 has been held every four years as a World Cup warm-up.

What is the point?

Having started as a relatively small-time affair between the winners of four continental cups, the Confederations Cup is now of paramount importance.

This year's tournament, as it did for South Africa in 2009, Germany in 2005 and Japan and South Korea in 2001, gives Brazil the perfect opportunity to fine-tune its hosting skills ahead of putting on one of sport's greatest events next year.

The state of their stadiums, transport links, ticket sales, marketing campaigns and many other factors will be being tested out ahead of the next year's showpiece.

"The Brazilians will provide the global TV audience with a glimpse of what kind of stadium atmosphere to expect in 2014: full stands and a great reception for all teams in return for football at its best on the pitch."

While the Confederations Cup is very much regarded as a practice event for the following year's World Cup, Spain's Cesc Fabregas has been quick to stress the importance of the tournament to the players.

Hosts and reigning Confederations Cup champions Brazil boast an array of attacking talent in their squad as they bid to lay down a marker ahead of next year's World Cup.

Veterans Ronaldinho and Kaka may have been surprise omissions by the head coach Luiz Felipe Scolari, but with Barcelona new boy Neymar and Chelsea's Oscar in their ranks, the Samba boys have no shortage of fire power.

"We could lose out in terms of experience, but we will make up for that with the enthusiasm which the young players bring," said Scolari, who has also overlooked Chelsea's Ramires and the former Milan striker Alexandre Pato for the tournament.

Brazil, who drew with England in a warm-up match, are ranked at a lowly 22 in the world but will be fancied by many to claim their third consecutive Confederations Cup success, and their fourth overall.

They know they will not have things their own way though, with the current world and European champions Spain also naming a strong squad for the tournament.

Spain contain a number of English Premier League stars in their ranks, including Fernando Torres, Juan Mata and Santi Cazorla, while possessing a talented midfield including Xavi and Andres Iniesta.

"It's almost impossible to have every player who merited a place," said coach Del Bosque. "Cesc Fabregas, [David] Villa, Torres and Soldado are our four strikers. You could just as easily ask why we didn't include [Imanol] Agirretxe, Iago Aspas, Michu.

"We can't bring in everybody. We've deemed it fit to call up Soldado because he's had a great season. We've called up those players who are going to help us have the best tournament.

"It's impossible to please everyone. Some will say why are players like Xavi going who are tired. They all want to be here and are looking forward to it. No-one has said they don't want to be in the Confederations Cup."

Tahiti qualified for the Confederations Cup by winning the 2012 Oceania Nations Cup with a 1-0 final victory over New Caledonia to become the first side other than Australia and New Zealand to win the tournament since it began in 1973.

Tahiti's squad is comprised almost entirely of amateurs, including office workers, labourers, school teachers and salesman, nearly all of whom ply their trade in the local competition on French Polynesia's main island.

There is only one professional in the squad - forward Marama Vahirua, who is 33, a former French Under-21s international and who has yet to play a senior international for Tahiti.

"Many people are surprised we actually play football on grass and not just on the beach for fun, but we do and we are improving at it," Henri Thierry Ariiotima, president of the Tahiti FA, said.

"Just being involved in the Confederations Cup really gives us the chance to improve and having to organise the Beach World Cup for Fifa with 16 teams proves we have the capacity and potential to play a real part in world football.

"We know our limitations and we know we face very hard opponents in the Confederations Cup, but playing the world champions at the Maracana is an impossible dream that has been made real. I just hope we get our tactics right.

"Of course we will probably lose, but we don't want to lose by too many goals."

It will be the second time a Fifa tournament has used goal-line technology after it was brought in at the Club World Cup in Japan last December.

German-based manufacturer GoalControl will be used in Brazil and will continue at the World Cup a year later, provided the performance reaches the requirements.

Fifa president Sepp Blatter pushed for technology after Frank Lampard's goal was ruled out in England's 4-1 defeat by Germany in the 2010 World Cup.

British-based Hawk-Eye was one of four firms that had bid for the tender.

Fifa said in a statement: "The final decision was based on criteria relating more specifically to the tournaments in Brazil, including the company's ability to adapt to local conditions and the compatibility of each GLT system."

GoalControl, which employs 14 high-speed cameras located around the pitch directed at both goals, uses cameras to determine whether the ball has crossed the line.

He has scored 20 goals in 33 appearances for his country and over the last few years was linked with moves to Manchester United, Chelsea and Real Madrid.

He helped Santos to their greatest run since Brazil legend Pele stopped playing for the club in the 1970s, helping them win the 2010 Brazilian Cup, the 2011 Copa Libertadores and three straight Sao Paulo state championships.

The 26-year-old Napoli striker is reported to be a target for new Chelsea boss Jose Mourinho.

Cavani, known as El Matador, has scored 104 goals in three seasons for the Naples club - only 11 behind the total the legendary Diego Maradona managed in seven seasons there.

He has scored 13 goals for Uruguay since making his debut in 2008.

The Chelsea striker has been recalled to Spain's Confederations Cup squad, having been omitted by coach Vicente del Bosque in recent times.

The 29-year-old scored 22 goals in 64 appearances for Chelsea last season and was a regular scorer in the Blues' successful Europa League campaign.

He will be desperate to show new Chelsea boss Jose Mourinho what he is still capable of ahead of the next campaign.

The Manchester United striker was a key figure in helping Mexico reach the tournament, scoring seven goals to win the 2011 Concacaf Gold Cup.

Robin van Persie's arrival at Old Trafford restricted him to limited starts last season but he still hit 18 goals in all competitions.

The 25-year-old signed from Chivas de Guadalajara in July 2010.

The 23-year-old striker was Tahiti's goal-scoring hero to win the Oceania Nations Cup last year and book their place in the Confederations Cup for the first time.

Chong Hue is the only French Polynesia-born player on their roster to be born and bred away from the nation's main land mass, being a native of Raiatea, an island of just 12,000 inhabitants.

He has scored seven goals in 15 games for Tahiti and plays for AS Dragon in the Tahiti first division.