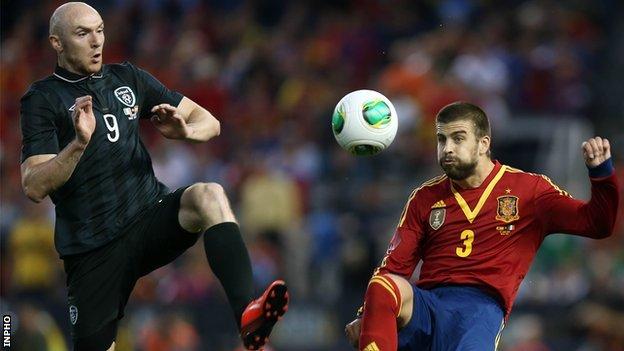 Second-half goals from Roberto Soldado and Juan Mata earned Spain a deserved win over the Republic of Ireland in a friendly match in New York.

Soldado's 69th-minute volley gave the world and European champions the lead, but Sean St Ledger had an 81st-minute effort ruled out for offside.

James McClean also went close to levelling, but Chelsea's Mata made sure with a cool 88th-minute finish.

Republic manager Giovanni Trapattoni was forced to select from a much depleted squad for the game, played in front of 39,368 at the Yankee Stadium, and his side showed seven changes from the one which beat the Faroe Islands 3-0 in a World Cup qualifier last week.

Spain, fielding a strong team in their final warm-up game for the Confederations Cup in Brazil, moved the ball with customary ease to leave Trapattoni's men chasing shadows.

The Spanish dominated the early stages and it took two minutes 52 seconds after kick-off for Republic keeper David Forde to become the first Irishman to get a meaningful touch of the ball.

But as Xavi, Pedro, Andres Iniesta, David Silva and David Villa went through their full range of tricks, the Irish proved resilient in defence and, despite several real scares along the way, they got to half-time without conceding.

Indeed, they might have returned to the dressing room with an unlikely lead, but Derby striker Conor Sammon prodded his shot wide of the far post after catching Gerard Pique in possession.

After a testing start, Andy Keogh had cleared Victor Valdes' bar with a 12th-minute volley and full-back Paul McShane did the same with a header two minutes later.

Pedro should probably have scored after McShane had diverted the ball into his path as Villa carved his way into the penalty area 12 minutes before the break.

Villa was denied by the advancing Forde after being played in by Silva six minutes later, but the Millwall keeper needed the help of the crossbar to keep out Pedro's left-foot pile-driver.

Spanish boss Vincent Del Bosque replaced Silva with Manchester City new boy Jesus Navas at the break, but the pattern of the first half was largely repeated with Spain dominating possession and Ireland hanging on.

Spain came in wave after wave, but simply could not break down the Irish ranks with Forde coming from his line to pluck Pedro's 55th-minute cross off Villa's head after good work by Navas.

Del Bosque shuffled his pack as the hour mark approached with Valdes, Iniesta and Villa making way for Iker Casillas, Cesc Fabregas and Soldado, but it was Navas and Pique who tested Forde in quick succession as his side pressed once again.

McShane survived penalty appeals with Jordi Alba ambitiously claiming he had handled his 65th-minute cross, but Ireland were not so fortunate four minutes later.

Full-back Alvaro Arbeloa turned up inside the box and prodded the ball towards Soldado, whose crisp volley flew beyond Forde and into the bottom corner.

Pedro might have doubled his side's advantage seconds later, but stabbed wastefully wide, and Soldado poked wide after being played in by fellow substitute Mata.

The Republic would have been back in it with 10 minutes remaining had Casillas not produced a fine save to keep out McClean's shot, and they thought they had levelled from the resulting corner.

Casillas pulled off another notable stop to turn Stephen Kelly's near-post header on to the bar, and when the ball came back off the post, St Ledger controlled and fired home only to see the offside flag go up.

Worse was to follow when Mata, who had replaced Pedro straight after the first Spanish goal, scored a coolly-taken second two minutes from time to complete victory.