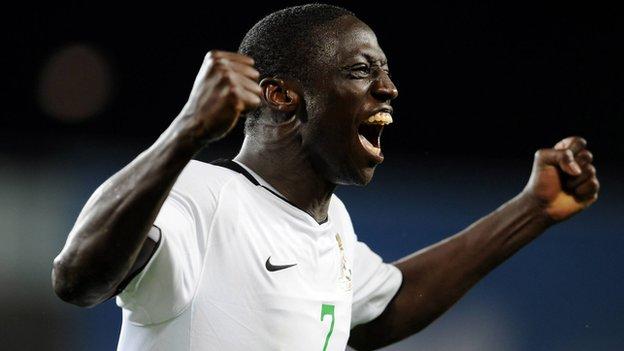 Zambia swept aside Lesotho 4-0 to reclaim top spot in World Cup qualifying Group D from Ghana, who had moved to the summit on Friday after beating Sudan.

The 2012 African Champions have 10 points, one more than the Black Stars, after two goals from Jacob Mulenga and one each from Christopher Katongo and Collins Mbesuma earned them a comfortable win.

With two rounds of matches remaining it is now a straight fight between Chipolopolo and Ghana to finish top of the group and reach the play-offs as Sudan and Lesotho have been eliminated by their defeats this weekend.

Also out of the running to reach Brazil next year are Botswana, who fell 2-1 at home to Group A leaders Ethiopia.

Getaneh Kebede and Salahdin Ahmed put the visitors two goals up before half-time and, although Botswana hit back through Tebogo Sembowa, it was enough to earn the Walya Antelopes a victory that takes them to 10 points.

They lead South Africa by two points after Bafana Bafana also recorded a win in their game, away to Central African Republic (CAR).

Bernard Parker opened the scoring in the first half for the 2010 World Cup hosts and Siphiwe Tshabalala and Katlego Mashego added one apiece after the break to complete a 3-0 victory that keeps their qualification hopes alive.

Sierra Leone were seconds away from pulling off a shock victory over Group B leaders Tunisia but conceded a late goal to be held 2-2.

The Leone Stars, who have not lost at home for five years, looked to have given new coach Johnny McKinstry the perfect start to his coaching career and revived their hopes of making the play-offs but Fakhreddine Ben Youssef rescued Tunisia at the last.

Earlier, Kaiansu Kamara's opener was cancelled out by Oussama Daraggi's penalty before Alhassan Kamara made it 2-1.

Babanco and Djaniny scored for Cape Verde, while Jonatas Obina was on target for the visitors.

The win only provides a little pride for The Blue Sharks as they cannot qualify from the group.

Africa's top-ranked side Ivory Coast were comfortable 3-0 winners against The Gambia, who now cannot progress. The Elephants moved to 10 points at the top of Group C thanks to goals by Lacina Traore, Wilfried Bony and Yaya Toure.

In the group's other game, later on Saturday, Morocco kept their slim qualification hopes alive by securing a 2-1 victory over Tanzania, who slip to four points behind Ivory Coast.

The Taifa Stars had Aggrey Morris sent off at Stade de Marrakech before Abderrazak Hamdallah and Youssef El Arabi scored either side of half-time. Amri Kiemba pulled one goal back but the Atlas Lions held on to move to five points,

In group J, a fourth-minute goal from Tonny Mawejje proved sufficient to earn Uganda a win against Liberia in Kampala.

The result lifted Uganda off the bottom of the table and into second place by one point.

And with leaders Senegal managing only a 1-1 draw in Angola in the group's other game, The Cranes have come out of the weekend as big winners, reviving their chances of reaching the play-offs.

Senegal took the lead with a Papiss Cisse strike on 23 minutes but they were pegged back after the break when Afonso Guilherme struck.

There are only two points between Senegal on six at the top of the table and Liberia, who have sunk to the bottom.

Congo-Brazzaville missed the chance to put one foot in the play-offs after being held 0-0 away to Gabon.

But the Group E leaders are still firmly in control of their own destiny, sitting six points ahead of The Panthers and a further point ahead of Africa Cup of Nations finalists Burkina Faso and Niger, who play each other on Sunday.