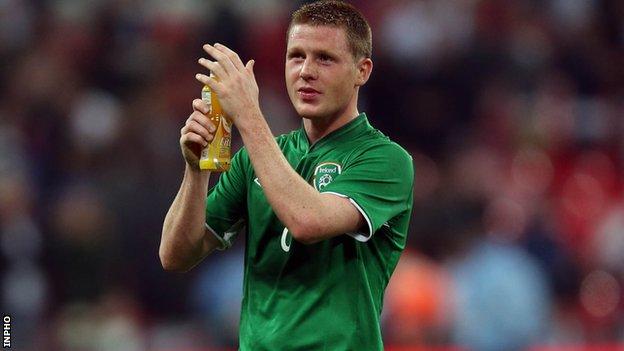 Giovanni Trapattoni has challenged James McCarthy to step up his football education by pitting his wits against Spain in New York on Tuesday night.

After a stuttering start to his Republic of Ireland career, the 24-year-old has established himself as a regular over the last six months.

Trapattoni says the friendly is a "great opportunity" for McCarthy, who was relegated with Wigan this season.

Conor Sammon and Jeff Hendrick, they play Championship, and I have to ask why when I see the games in the Premier League and the way they play with us. Quality is quality

The midfielder was suspended for Friday's win over the Faroe Islands.

Italian Trapattoni added: "Yesterday I said 'James, in this game you have this great opportunity to play against the famous and most important players', because I became famous when I was like James.

"I played against Pele, Cruyff, Eusebio - they were the best players in the world. I grew because I took confidence because I could play against them.

"I told McCarthy he must believe. He has vision, he has good shooting, but he can be more enterprising."

McCarthy could be in opposition to world stars such as Xavi, Andres Iniesta and Sergio Busquets in the clash at Yankee Stadium.

The midfielder's development has been one of Trapattoni's main concerns during this four-match end-of-season campaign with the manager alternately praising his contributions, but also attempting to coax even more out of a player in whom he believes there is great potential.

Trapattoni has also been delighted with the recent efforts of Derby midfielder Jeff Hendrick.

The 21-year-old could get a chance to face up to some of the world game's biggest names in the game.

Many of Trapattoni's players play in the lower reaches of the Premier League or the Championship, and that is a situation the Italian sometimes struggles to understand.

"I think very much about our players who play in the Championship and not in the Premier League," added the Republic boss.

"For example, Conor Sammon, Hendrick, they play Championship, and I have to ask why when I see the games in the Premier League and the way they play with us. Quality is quality."

Tuesday's game is a repeat of Ireland's second game at the Euro 2012 finals, a contest which ended 4-0 to the eventual winners.

Only three of the men who started in Gdansk that night - Sean St Ledger, Robbie Keane and Simon Cox - have made the trip to New York.