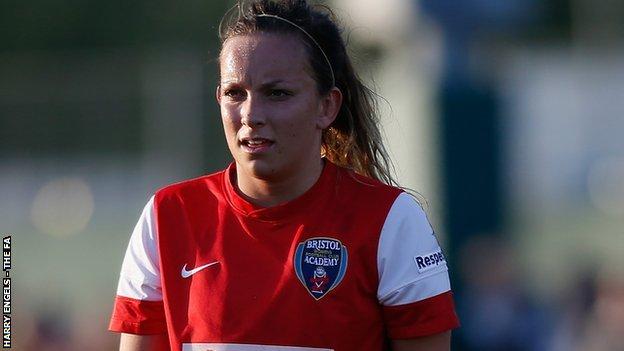 Injured midfielder Lucy Staniforth wants to stay with Bristol Academy and hopes she has done enough to earn a new contract for next season.

The 20-year-old joined the Vixens from Lincoln in December on a one-year deal.

She made nine appearances before suffering a serious knee injury in the FA Cup final defeat by Arsenal and will be out of action for nine months.

"I felt I was growing into the team and into my role well and I was looking forward to the rest of the season.

"Hopefully Mark wants to keep me on next season, so it's a case of me and him having a conversation somewhere down the line."

England Under-23 international Staniforth fell awkwardly in the second half of Bristol's 3-0 loss to Arsenal at the Keepmoat Stadium last month.

Scans revealed extensive damage to her cruciate ligament and will undergo surgery on Thursday.

Having never had a major injury before, Staniforth admitted: "It's hard to come to terms with it, as you never think you're going to be that person.

"I wasn't hysterical about the pain as it didn't hurt at the time, it was the realisation about what I'd done.

"I thought: 'I'm not going to be playing for ages and I've just fallen over in an FA Cup final'. I couldn't believe it."

Since being told her season was over, York-born Staniforth has remained in Bristol to receive treatment from both Vixens staff and men's club Bristol City, who have provided her with specialist equipment.

She has travelled with the squad on match days but has found it difficult viewing, despite the club sitting joint top of the Women's Super League.

"Watching the game against Birmingham was the hardest thing I've done so far," said the former Sunderland player.

"The girls won and it was brilliant for them, but it was really hard for me to feel involved. I wanted them to enjoy it and I just wanted to stay away."

Staniforth is expected to return to training in six months and is now trying to stay positive about her comeback.

"In the first few days I was just neglecting life's responsibilities," she added. "But my friends and family have made it clear that I need to keep on track.

"I've not looked too far in to future as you're always going to want things to happen when it may not be the time for it.

"If I take it a step at a time I'll grow with confidence as I go along."