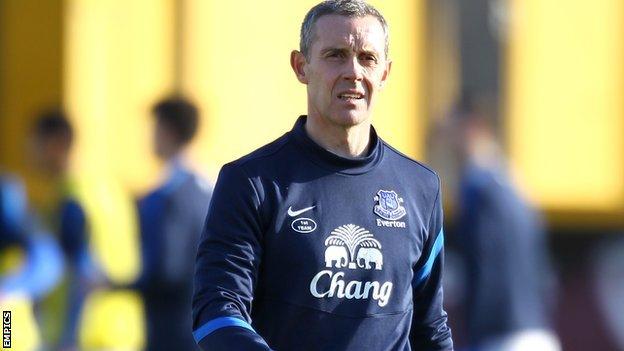 Sheffield United have appointed Everton coach David Weir as their new manager on a three-year deal.

The 43-year-old had emerged over the weekend as the front runner to succeed Danny Wilson at Bramall Lane.

This is a first managerial position for the former Hearts, Everton, Rangers and Scotland defender.

"My first thoughts about the job are of excitement. I understand how privileged I am to be named manager here," Weir told the League One club's website.

"I realise what a great opportunity is in front of me now and my message to the supporters is that I will work hard and give everything to be successful at Bramall Lane.

"I honestly can't wait to get started and get a real feel for the club, then obviously I am eager to get organised for when the players return for pre-season training later this month."

Weir, who won 69 international caps, had a brief spell training with the club in January 2012 prior to returning to Goodison Park to take on a coaching role.

He was recently interviewed for the manager's job at Everton, where he has been a reserve-team coach, before they appointed Roberto Martinez and will now be looking to guide the Blades out of the third tier at the third attempt following two failed play-off campaigns.

Wilson parted company with the club in April with the Blades in fifth position but caretaker Chris Morgan, who has now reverted back to his previous coaching role, was unable to lead them up as they lost to Yeovil in the play-offs.

Motherwell boss Stuart McCall then turned down the chance to take over and Central Coast Mariners manager Graham Arnold held talks with the club before opting to remain in Australia after labelling the former Premier League side "prehistoric".

Blades chief executive Julian Winter said: "We are thrilled to appoint David and the three-year contract emphasises the fact that he will assist in a change in club culture.

"I have stated before that the club needs to act differently and David is young, has a great pedigree and will bring a new vision and leadership to the club."