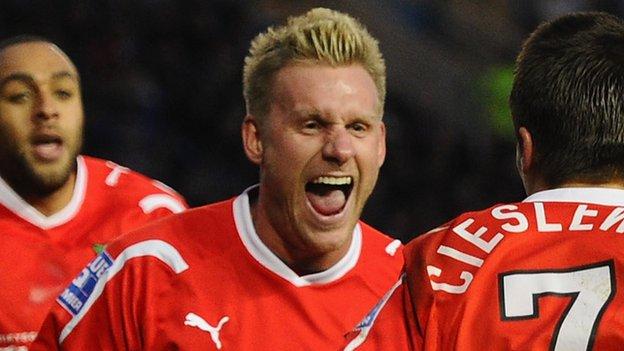 Kidderminster have signed Jamie Tolley following his release by Mansfield, the club who beat them to the title and promotion back to the Football League.

The 30-year-old midfielder has twice been with clubs who have been promoted from the Conference, Shrewsbury in 2004, as well as Mansfield.

The Ludlow-born former Wales Under-21 international also had two near misses in successive seasons with Wrexham.

"I know this league. It was an easy decision," he told BBC Sport.

"When I was at Shrewsbury, we went straight back up the season after going down and, when I was at Wrexham, we finished third and second, and should have won the league.

"Hopefully we can progress on the finish of last season and get promoted. I'm buzzing to have signed here."

The former Macclesfield and Hereford player admits that he might have had an earlier impact at Aggborough, having actually been close to coming to on loan last season after falling out of favour at Field Mill.

"We tried to sort something for me to come on loan last season when I was at Mansfield," he said. "But that didn't get sorted for one reason or another.

Tolley, who has signed a one-year deal to officially become a Harriers player from 1 July, is the second new arrival in a week, following the signing of winger James Dance.