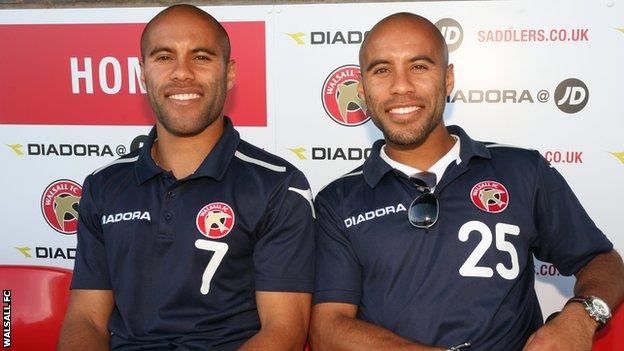 Twins Adam and James Chambers have both signed new contracts with League One club Walsall.

Midfielder Adam, who arrived at the Bescot Stadium in 2011, has signed on for another two seasons.

Which Chambers is which?

Defender James, who arrived on the eve of last season, has committed to another year.

Walsall boss Dean Smith was pleased to tie up the two 32-year-olds, admitting: "They are fantastic professionals and good people to have around the place."

Smith, who first worked with Adam in his time as assistant manager to Martin Ling at Leyton Orient, added: "I've known him a long time.

"He has proved to be an invaluable member of the team both on and off the field since he arrived here two years ago. He plays a key role in the middle of the park.

"To secure his services for another two years is a real boost to us.

"James came in at the start of last season looking to prove himself and he has certainly done that.

"He worked his way into the team and showed us what he can do in both full-back positions.

"Like his brother, he is a role-model for the younger lads and his experience will prove vital to us."

The two brothers started their career together with West Bromwich Albion, signing professional forms at The Hawthorns in 1999.