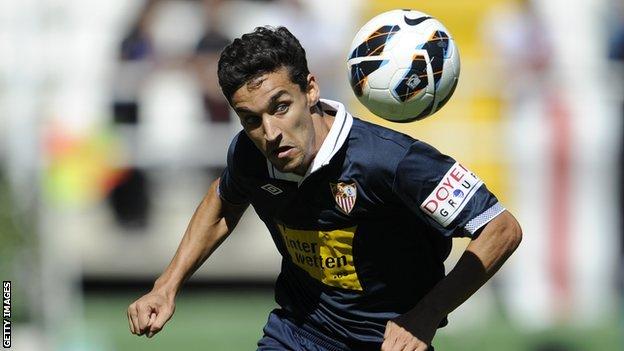 Manchester City have confirmed the signing of winger Jesus Navas from Sevilla on a four-year deal.

Navas, 27, passed a medical in New York to complete a deal worth an initial £14.9m, potentially rising to £15.9m over the course of his contract.

"Manchester City is an exciting project and this is the right moment for me to take this step," he told the club's official website.

Navas has suffered from chronic homesickness in the past and spent his entire career at Sevilla, which is 20 miles north of his hometown of Los Palacios y Villafranca.

He turned down a move to Chelsea after helping Sevilla beat Middlesbrough in the 2006 Uefa Cup final, citing a fear of living abroad.

Navas has suffered from anxiety attacks when away from home for extended periods and has been forced to leave training camps on several occasions.

The good news for Manchester City fans is that extensive counselling appears to have alleviated the problem.

"I'm very happy with the opportunity and the decision."

Navas, who has earned 23 caps for Spain, is City's second major signing of the summer following Fernandinho's arrival from Shakhtar Donetsk for a fee of around £30m.

The Spain international has spent his entire career to date at Sevilla, which is 20 miles north of his hometown of Los Palacios y Villafranca.

He was a key part of the Sevilla team that won the Uefa Cup in 2006 and 2007 but was held back earlier in his career by a fear of travelling away from his Andalusian home.

A quick and direct right winger, he was a member of Spain's successful 2010 World Cup and Euro 2012 squads and

"The Premier League is a competition where the football is very fast and will suit the way I play. I'm really looking forward to it," Navas said.

"I'm going to a great club in England and I want to continue developing my game there. The club has put a lot of faith in me and I want to repay them out on the pitch."

City are yet to appoint a successor to Roberto Mancini as manager, with Manuel Pellegrini expected to move to the club from Malaga.