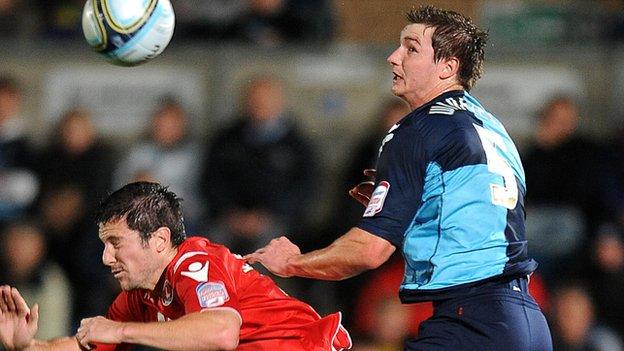 The 25-year-old defender, whose contract at Wycombe was due to expire, becomes Town's second signing of the summer, following the arrival of Bolton Wanderers left-back Alex McQuade.

The signings of both players will be formally completed on 1 July.

Wycombe captain Winfield began his career at his hometown club Aldershot, who he helped to win promotion to the Football League in 2008.

He was then signed by Gary Waddock for Wycombe in the summer of 2010, for a tribunal-set fee of £25,000, since which he has made exactly 100 appearances, scoring six times, in his three seasons at Adams Park.

He was a big part of the Wycombe side who controversially pipped Turner's Shrewsbury to promotion in 2011.

"He's a big, strong lad who is effective in both boxes," said Town manager Graham Turner.

"There's plenty of scope for him to improve yet. It's a big challenge for him coming here."

Turner has long-term injury worries over two of last season's first-choice defenders, Darren Jones and Jermaine Grandison, who have both undergone surgery.

But, having also signed up two of his out-of-contract players, young striker Tom Bradshaw and midfielder Aaron Wildig, on new one-year deals, his squad is starting to be remoulded after the end-of season decision to offload five players, including skipper Matt Richards and striker Marvin Morgan.