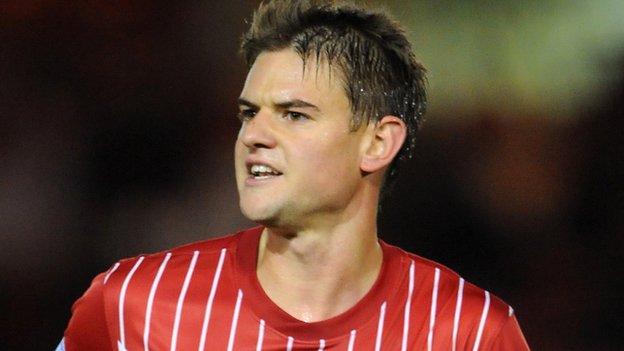 Hereford United have made their second summer signing by recruiting striker Sam Smith on a season-long loan from Conference Premier rivals Cambridge.

Smith scored three times in 20 games for the U's last season - nine of them from the bench - after signing for an undisclosed fee from Lincoln City.

"Sam is someone I've had my eye on for a while," said Bulls boss Martin Foyle.

"He's another youngster who comes here willing to learn. He's quick, skilful and has an eye for goal.

"I'm looking forward to seeing him develop as a player whilst he's with us."

Having already seen three of last season's first-team regulars sign new contracts, the arrival of Smith is a further indication that, having ended the campaign unable to pay their staff in full, Hereford's financial worries have eased.

But, on top of six players being released and three loan players returning to their parent clubs, centre-half Stefan Stam has returned to Holland, top scorer Ryan Bowman was signed by York City and winger Marley Watkins has joined Scottish Premier League side Inverness Caledonian Thistle.

"Of the players on the squad list at the start of last season, there are hardly any here now,'' admits Foyle. "Rebuilding is going to be very important.

"I have made offers to players but it's a case of whether they accept them, as they have got better offers on the table. We are second or third choice whether we like it or not.

"I have never been so busy in my life. This has probably been the most hectic time I have known," he told BBC Hereford & Worcester.

"Things have been sorted with a number of other players, but we're moving slowly."