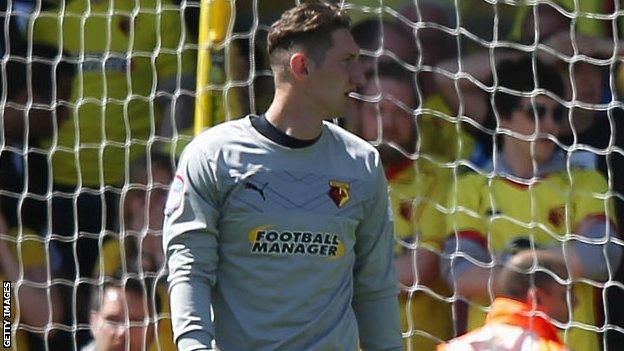 Brentford have signed goalkeeper Jack Bonham on a two-year deal from Watford.

The 19-year-old joins the Bees after playing once for the Championship club, replacing the injured Jonathan Bond in their final league game last season.

"He did well in a two-week trial at the end of last season and has enormous potential. He will improve by working with goalkeeping coach Simon Royce."

Born in Stevenage, Bonham is a Republic of Ireland Under-17 international and has previously played on loan at Isthmian League Premier League side Harrow Borough.

He becomes Brentford's first new signing since losing to Yeovil Town in the League One play-off final although Alan McCormack is expected to join the club from Swindon Town in the near future.

The 29-year-old has made 144 appearances for the Bees since joining on from Dagenham & Redbridge in 2009.