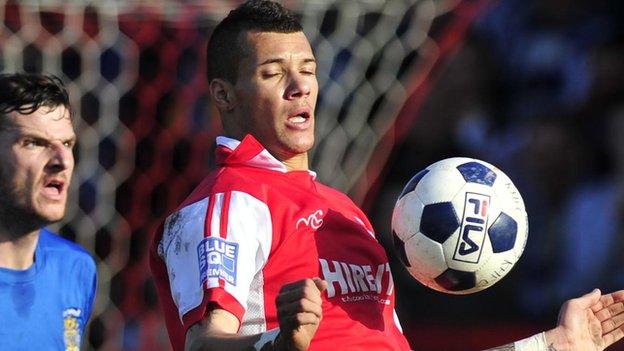 Kidderminster Harriers winger Marvin Johnson has signed a new one-year contract after impressing in his first full season at Aggborough.

His form led to reports of interest from Crewe Alexandra after he was watched by the League One side's manager Steve Davis.

"I am happy here and have enjoyed it here, everyone knows that," he said.

"I haven't got to worry about anything else and can just get my head right," said Johnson, signed from Birmingham side Romulus in February 2012.

Striker Michael Gash, who hit seven goals in 12 games on loan from Cambridge last season, was the first to join when he signed a two-year deal.

And midfielder Jamie Tolley will become a Harriers player on 1 July after agreeing a one-year contract, the second new arrival in a week, following the signing of winger James Dance.