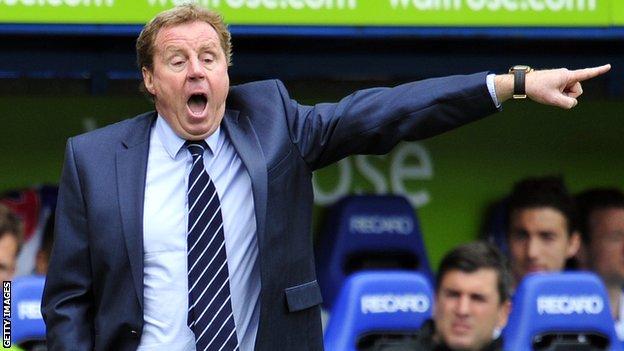 QPR manager Harry Redknapp believes England do not know how to play football and has backed Glenn Hoddle to take charge of the under-21s team.

England Under-21s failed to pick up a point in this year's European Championship under boss Stuart Pearce.

Redknapp was tipped to succeed Fabio Capello as manager of the senior side in 2012 but Roy Hodgson was appointed.

"We do not know how to play football. The changes have to come from the top of the game," he wrote in The Sun.

"That means manager Roy Hodgson getting involved with coaches at every level working in the same direction."

Pearce's side lost all three games in their European Under-21 Championship campaign as Italy,Norway and Israel all beat the Three Lions.

Redknapp, who won the FA Cup with Portsmouth in 2008, led Tottenham to Champions League qualification in 2010 before being heavily linked with the England job in 2012.

He was dismissed by Tottenham at the end of the 2011-12 season and was named QPR manager in November 2012. but could not prevent them from being relegated from the Premier League.

The 66-year-old continued: "In international football you cannot just hit and hope as you give the ball away. It's about possession, retaining the ball, controlling the game.

"The problem is that the England team has no pattern of play. We don't have the kids coached the same way - the right way - from a young age.

"As a result we have a senior team that is greatly underachieving, too."

Redknapp believes former senior boss Hoddle could replace Pearce at under-21 level if he moves on and has also tipped another ex-England manager, Steve McClaren, for the role.

Hoddle, who led England to the last 16 of the 1998 World Cup, was sacked as senior boss in February 1999 after controversial comments about disabled people

Redknapp added: "The last time we had an England team which looked to be heading in the right direction was under Glenn Hoddle.

"That's why I think he would be a great choice to become the new under-21 manager or to get involved in coaching of kids."