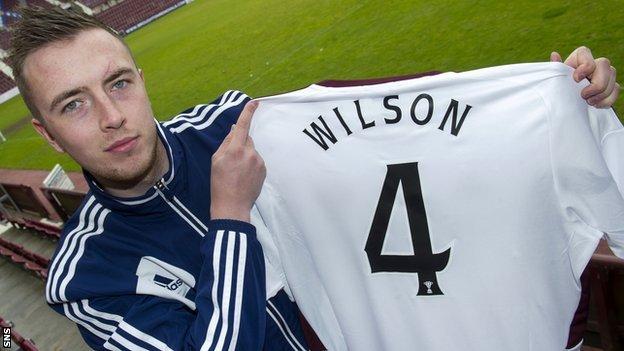 Hearts, who have will not be able to command a transfer fee for Danny Wilson.

It has emerged that the Tynecastle club are yet to register the Scotland international defender's contract with the Scottish Football Association.

However, he remains a Liverpool player until his contract ends there in July.

Wilson had been unveiled as Hearts's first summer signing and said he was comfortable with the assurances he had received about the financial health of the Tynecastle club.

But Hearts announced this week that uncertainty over the club's future has led to a serious cash-flow problem.

The Scottish Premier League club are £25m in debt - £10m to parent company UBIG, which is claiming insolvency, and £15m to Ukio Bankas, which has been declared bankrupt.

Hearts say this has led to a shortfall in the sale of season tickets and it is believed they require more than £500,000 to keep the club running until the start of the new season.

That equates to the sale of 2,000 more season tickets, but Hearts also hope that selling players will eat into that amount.

However, they will not be able to raise any money from the sale of Wilson, who made 14 appearances in the 2012-13 season on loan and was viewed as perhaps their most valuable on-field asset.