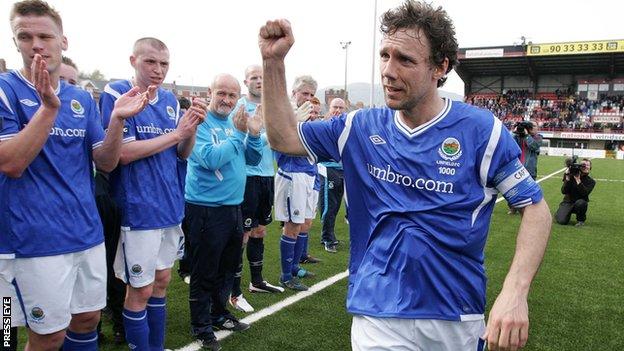 Former Linfield skipper Noel Bailie has been awarded an MBE in the Queen's Birthday Honours List.

Bailie, from Hillsborough, spent his entire career with the Windsor Park club, joining in 1986 and going on to make 1,013 appearances.

Now 42, the defender won 10 league championships and eight Irish Cups with Linfield before retiring in 2011.

"It was a huge surprise. I did not know there was anything like this in the pipeline," said Bailie.

"I suppose it is recognition for all those long, long hours spent at the one club, and I am really pleased."

Since retiring from playing, Bailie has been acting as a scout for Linfield.

McBurney has been involved with the Showgrounds club as a sponsor for around 25 years and occupied the position of chairman, before being appointed president.