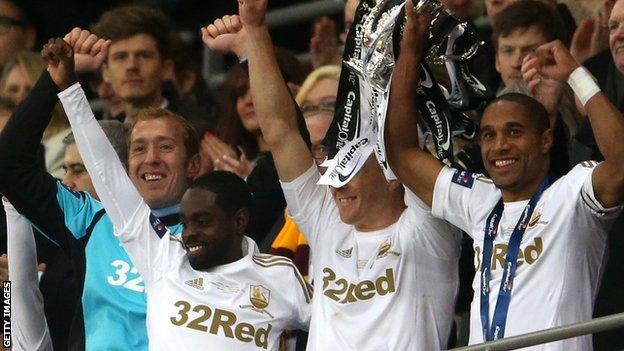 Relegated QPR have been drawn against League Two side Exeter City in the first round of the Capital One Cup.

All the ties will be played in the week commencing 5 August.

The winners in the first round, which sees teams from the Championship, League One and Two compete, could then face Premier League opposition.

Reading, who were also relegated from the Premier League, enter the competition in round two.

Teams that have qualified for Europe - Manchester United, Manchester City, Chelsea, Arsenal, Tottenham, Wigan and League Cup holders Swansea - all enter the competition in the third round.

League One champions Doncaster host Rochdale, while Watford - who missed out on promotion to the Premier League after losing to Crystal Palace in the Championship play-off final - will travel to Bristol Rovers.

Last season's losing finalists Bradford will make the short trip along the M62 to take on West Yorkshire rivals Huddersfield.

There is a South Yorkshire derby at New York Stadium as League One Rotherham host Sheffield Wednesday, while Blackburn travel to Carlisle.

Wolves, beginning life in the third tier after back-to-back relegations, visit the Lancashire seaside to take on Morecambe.