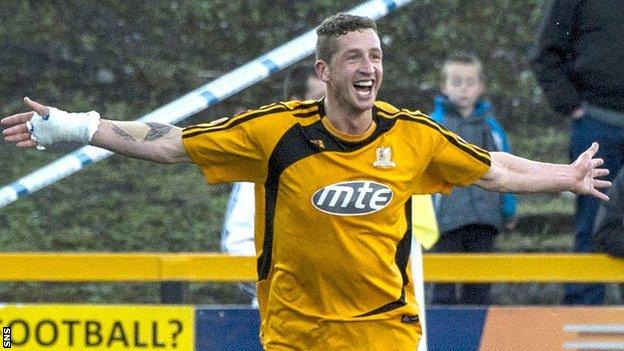 Former Scotland Under-21 striker Calum Elliot is officially a Raith Rovers player despite a signing dispute with Livingston, it has been confirmed.

The 26-year-old had agreed a pre-contract agreement with Livingston ahead of leaving Alloa Athletic.

But Raith Rovers three weeks later announced that he had signed for them.

Livingston have since decided not to challenge Eliot's decision and Rovers are the only club to have registered him with the Scottish FA.

The dispute between the Division One clubs is echoed in the Scottish Premier League, with .

St Johnstone chairman Steve Brown, who has refused to accede to Brittain's request to tear up his pre-contract agreement and remain in Dingwall, has warned that the future of such could be called into question if they are allowed to be broken.

However, Livingston gave Elliot, who had previously spent a loan spell at Almondvale from Hearts, the green light to join Rovers.

The West Lothian club also aimed some criticism at the behaviour of the striker, who had spent the end of the season on after leaving Zalgiris Vilnius and helped the Wasps win promotion to Division One.

"Livingston FC remains unhappy about the situation which has developed regarding Calum Elliot and his decision to 'sign' for Raith Rovers after previously agreeing to join us," Livi said on their website.

"Calum's conduct has been extremely disappointing given that he appeared happy to sign for us in April and signed documents to that effect.

"Nevertheless, we are keen to ensure that the matter does not drag on and impact on our preparations for the new season.

"Consequently, we have decided not to pursue the situation further or lodge any complaint with the football authorities.

"Our focus has now moved to recruiting an alternative player who will display the level of commitment and professionalism that the remainder of our squad deserve to see from a team-mate and our supporters expect to see from a Livingston player."

Edinburgh-born Elliot began his career with Hearts and also had loan spells with Motherwell and Dundee before heading for Lithuania.