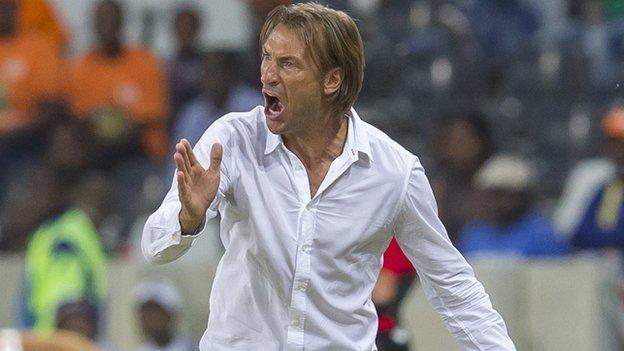 Zambia suffered a major blow to their hopes of qualifying for a maiden World Cup when held to a 1-1 draw at home by Sudan on Saturday.

The failure to take all three points in Ndola means Ghana can go top of Group D should they win in Lesotho on Sunday.

The 2012 African champions now have 11 points from five matches, with Ghana on nine points ahead of their Maseru tie.

We are big fans of Lesotho on Sunday!

Whatever the Black Stars' result in Sunday though, the destiny of the group will be determined when Ghana host Zambia in the final weekend of group qualifying in September.

However, Zambia coach Herve Renard knows his side complicated their World Cup mission against the Sudanese.

"We are at this moment very frustrated," he said after the match.

"We did now show enough that we wanted to beat them in the first half and it was a bit better in the second half.

"We conceded one stupid corner and made one mistake during the game, then at the end it is 1-1 so we are unfortunate for that. It is our fault though.

"We do not have any excuse. We failed when we drew 1-1 and we have to wait for the Ghana result and then we will see how our team will be."

"We are big fans of Lesotho on Sunday and I hope Lesotho will play the same as Sudan played today,"

Elsewhere, Botswana won their first match in Group A when beating Central African Republic 3-2 on home soil in a clash that was high on drama but which has little impact on the table.

For the team that progresses to the third and final round of qualifying from this group could be determined on Sunday if leaders Ethiopia win at home against 2010 World Cup hosts South Africa.

Playing in the south-eastern city Lobatse, Central African Republic made the brighter start as Nicaise Ozingoni fired home after 33 minutes.

The advantage only lasted eight minutes however as Jerome Ramatlhakwane levelled the scores from the penalty spot moments after Ali Calvin Tolmbaye was dismissed for the visitors.

Despite being down to ten men, Central African Republic regained the lead when Ozingoni grabbed his second of the game five minutes into the second half.

As Botswana struggled to find a way through, it looked as though the visitors might hold on for their first ever away win in World Cup qualifying - which would have come against the only team they have ever beaten in the competition.

Such hopes were shattered though when Mogakolodi Ngele equalised for the hosts after 74 minutes, before Ofentse Nato struck a winner just four minutes from time.

Botswana climb off the bottom of Group A, with their four points now one better than CAR.