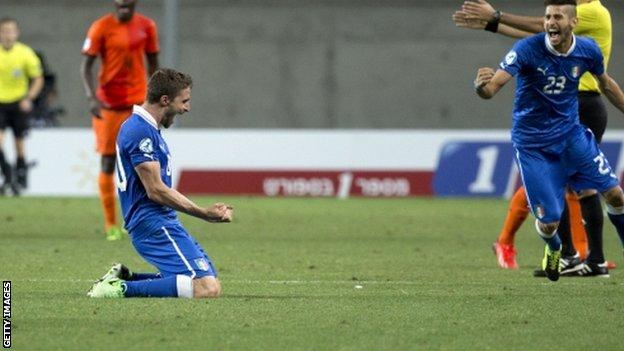 Italy will face holders Spain in the European Under-21 Championship final as a goal from Liverpool's Fabio Borini gave them victory over the Netherlands.

The 22-year-old forward struck the winner 11 minutes from time, slotting in from Lorenzo Insigne's pass.

Spain booked their place in Tuesday's showdown with a 3-0 win over Norway.

Rodrigo Moreno, Malaga's highly-rated Isco and Alvaro Morata all scored to give the tournament favourites victory in Netanya, Israel.

The Spanish, yet to concede a goal in their three matches, were again in ominous form.

Norwegian goalkeeper Orjan Nyland denied Isco with an excellent early save early on.

However, they finally broke the deadlock just before half-time when Benfica's Rodrigo Moreno hooked home from close range.

Midfielder Isco doubled their lead in the 87th minute with a quality right-foot finish before Real Madrid striker Morata added in a third in stoppage time.