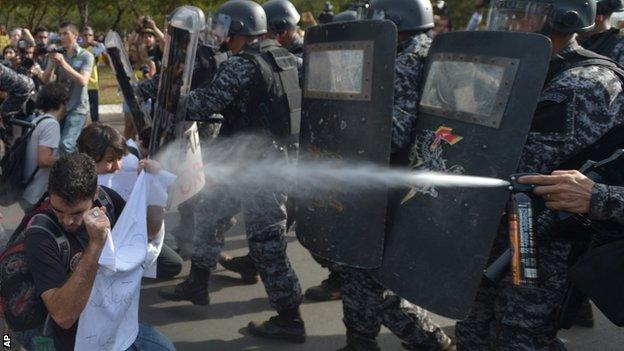 Up to 1,000 Brazilians demonstrated outside the country's national stadium to vent their anger at the amount of money the country is spending on staging next year's World Cup.

Police used tear gas and pepper spray to control protestors before the match, in which Brazil beat Japan 3-0.

There were also reports rubber bullets were used and 30 arrests were made.

Demonstrators held up posters reading: "We don't need the World Cup" and "We need money for hospitals and education".

BBC Sport's South American football correspondent Tim Vickery told BBC World Service: "Brazilian society was explicitly told in 2007 that all of the money spent on stadiums would be private money.

"It hasn't worked out that way at all. More than 90% of the money being spent on football stadiums is public money."

The Confederations Cup is a dress rehearsal for the World Cup next year and the stadium in Brasilia used for the inaugural match was one of the most expensive of the six built, costing around £380m.

Vickery added: "Of the 12 stadiums for the World Cup, some of them are in the heartlands of Brazilian football will be very well used indeed.

"But there are four - Brasilia plus three others - that you really wonder where the long-term viability will be.

"Brasilia does not have a team in either of the first two divisions of Brazilian football and doesn't really have much of a local football tradition at all.

"The idea seems to be that it is going to be viable with pop concerts. I'm a little bit dubious about that one."