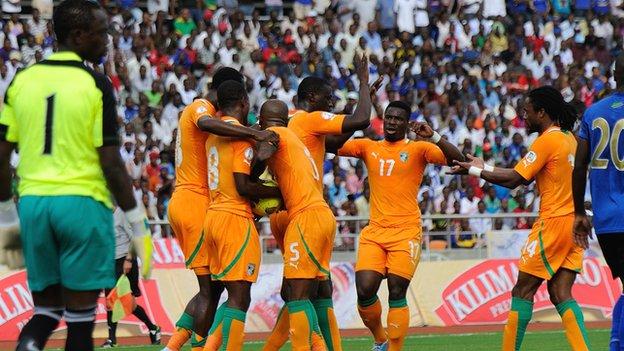 Ivory Coast became the first team to reach the third and final round of African qualifying when winning 4-2 in Tanzania on Sunday.

The victory takes the Group C leaders to 13 points, with Morocco second with eight points and just a game left.

The Elephants had to come from behind to win as Amri Kiemba gave the hosts a second minute lead in Dar Es Salaam.

Lacina Traore soon levelled and a brace from Yaya Toure and one from Wilfried Bony took the visitors through.

Manchester City midfielder Toure was a key figure in the game, setting up Traore after 13 minutes to cancel out the opening strike from Kiemba, who profited from a defensive lapse.

Toure then struck a free-kick from outside the area after 23 minutes to give the Elephants the lead, only for Thomas Ulimwengu to draw the hosts level 12 minutes later as he converted Shomari Kapombe's cross.

Just a minute before the break, Toure restored the Ivorians' advantage from the penalty spot after Gervinho went down in the box.

Tanzania tried to find a way back into the match in the second half but their attempts were killed off when Bony tapped in Gervinho's cross three minutes into stoppage time.

The goal confirmed the Ivorians' progress ahead of their final clash at home to Morocco in September.

Tanzania - whose six points keep them third in the group - will travel to The Gambia for their final tie, where the hosts will seek only their second point of the campaign.

Ivory Coast will learn who they will face in the play-offs when the Confederation of African Football conducts the draw for the third and final round of qualifying on 16 September.

On Saturday night, Morocco were 2-0 winners over The Gambia in Marrakech thanks to goals from Abdelaziz Barrada and Younes Belhanda - but the result is a mere footnote after the Ivorians' win.

The Atlas Lions - who suffered a disappointing Africa Cup of Nations in January - will now turn attentions to preparing for the 2015 Nations Cup, which the North African nation will host.

It has been a disastrous start for Gambia coach Peter Johnson, who replaced Italian Luciano Mancini earlier this month, with the Scorpions losing 3-0 at home to Ivory Coast last weekend.