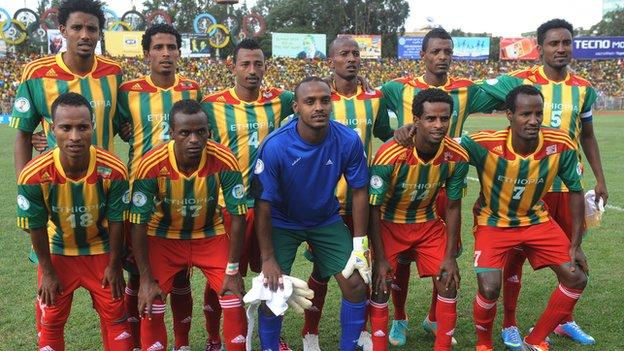 Ethiopia and Tunisia's progress to the final round of African World Cup qualifying are in doubt as Fifa opened three probes into player eligibility.

Tunisia also believed they had gone through but Fifa is investigating a case involving Equatorial Guinea which could affect the Group B standings.

Togo are the third team in question, meaning Group I could also change.

Fifa rules state guilty teams "will be sanctioned by forfeiting the match".

Ethiopia face accusations they fielded an ineligible player in the 2-1 win over Botswana on 8 June in Group A.

According to the team lists published on Fifa's website Minyahil Teshome Beyene received a second yellow card of the group campaign at home to Botswana in March.

This should have theoretically earned a suspension, the midfielder then played Ethiopia's next match - away to the same opponents - in June.

However, the Ethiopian federation has yet to reveal the identity of the ineligible player in question for that fixture.

If the East Africans are found guilty, it would hand a lifeline back to 2010 World Cup hosts South Africa.

For should Ethiopia forfeit the victory against Botswana, then Bafana Bafana would only trail the group leaders by two points going into the final round of matches in September.

Despite the potential setback, the president of the Ethiopian Football Federation, Sehilu Gebremariam, is still confident his side can progress.

"This is shocking news - but the point is that we are still leading the group and we believe that we shall still qualify for the next stage," he told the BBC's Newsday programme.

"We are scrutinizing the situation and we will give information to Fifa and to the public."

He said they would be consulting the coaching staff to get their views on the situation before reacting further.

Tunisia's progress is on hold as Equatorial Guinea allegedly fielded an ineligible player in their 4-3 defeat of island nation Cape Verde in March.

Fifa says they recently ruled on that matter and that the 2012 Africa Cup of Nations co-hosts have appealed the decision.

The Carthage Eagles drew 1-1 in Equatorial Guinea on Sunday to seemingly book their place in the play-offs, but a technical victory for Cape Verde would change the complexion of Group B.

Should island nation Cape Verde receive the points from a match they originally lost it would lift the islanders up to nine points - just two behind the North Africans.

Tunisia host Cape Verde on the final day of the current qualifying stage.

Group I could also change as Fifa also look into whether Togo used an ineligible player in their 2-0 home win over Cameroon earlier this month.

The Togolese federation has not discussed the identity of their ineligible player - although on the Fifa website's team lists Alaixys Romao also picked up two yellow cards in qualifying before playing in the Lome victory against Cameroon on 9 June.

The Indomitable Lions, who are six-time World Cup qualifiers, now stand to gain the three points should the Togolese be found guilty.

Such a scenario would move Cameroon, who currently trail Group I leaders Libya by two points, a point clear in the table.

The West Africans host Libya in what is both sides' final encounter in September.