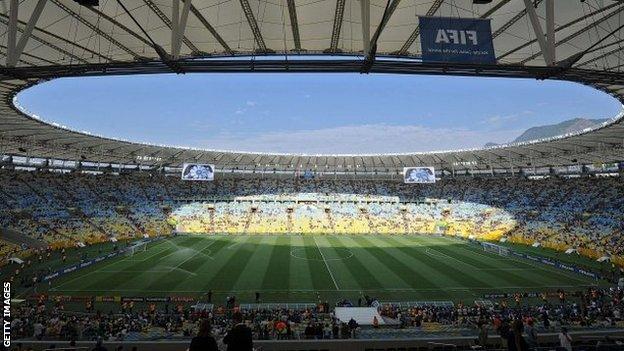 This was the night the Maracana got back to doing what it has always done best.

The men in the hard hats were nowhere to be seen, the walls had been painted, the lights fitted and the diggers had been driven away. What has been left behind is a stadium that crackles with noise, lights up with colour and allows football to take the headlines. At last.

To Brazilians, the name of this footballing mecca in Rio is pretty much all that links the new stadium to the old. The dressing rooms have moved, the capacity has been cut from a jaw-dropping 205,000 to close to 80,000 and the experience has been sanitised since the days of Pele and co.

Coming into the first competitive game to be played at the new Maracana, some feared that something has been lost in the modernisation, but as the overwhelming feeling was that while it has been reduced in size, it has been enhanced in majesty.

"To get onto the Maracana pitch is the dream of every child," said Italy midfielder Andrea Pirlo, who opened the scoring with a wonderful free-kick.

"To have the chance to win my 100th cap with Italy here - I am so happy. It is a dream fulfilled."

There is an enduring aura about this new stadium. Every seat has a perfect view, the lush green turf is smooth and slick, the seats add a dash of local colour, with rows of sky-blue above yellow, like Copacabana sand.

The redevelopment of the Maracana - - had not gone smoothly.

Journalists at the reopening in April reported "uneven flooring with small gaps and holes and flooding in the VIP area", while workers were still finishing building a stadium wall and ticket offices as turnstiles and gates were not working.

Much had been made of the traffic chaos that would engulf the stadium, many had predicted hour-long queues, chaos and criticism and yet the experience on Sunday afternoon was anything but chaotic.

A one-mile exclusion zone for vehicles in the four hours before kick-off meant the traffic was almost non-existent save for those actually going to the match. The turnstiles clicked with German efficiency, fans from all countries mixed and the experience was one that many will savour.

Alexandre Robalinho, a Brazilian who lives south of Rio, admitted he had been surprised by the experience. "I wasn't that excited to come back. I don't know why. All the complaints and the headlines had left a bad taste in the mouth. But I was wrong. It was fantastic."

Alexandre, a Fluminense fan, remembers the days when the stands would shake and more than 170,000 would cram in to watch club matches. "It feels like a different place inside, the concrete steps we used to sit on have gone, but what has been left behind is fantastic.

"It is something all of Rio can be proud of. I am looking forward to going back."

The noise that cascades down the stands and around the bowl at the Maracana was always something the great names of the past would talk about. The stands would shake with it, they said, the earth would move. That is no longer the case but the noise is amplified to glorious effect.

Not everything went to plan.

Hundreds of protesters clashed with riot police near the stadium minutes before kick-off as they continued their complaints about the high cost of financing the tournament and the 2014 World Cup, in a country still lacking in public services.

And construction failings have certainly heaped a degree of shame on Brazil in recent times. Even the threatened cancellation of the friendly against England last month rankled.

And yet both for the players, who walked out onto a pitch graced by Garrincha, Pele, Zico and so many greats, it raised the hairs on the back of their necks and for the fans and the people of Rio it was a reacquaintance with an old friend.

From now on the only major rebuilding job that will make headlines in Brazil will be the one being overseen by coach Luis Felipe Scolari.