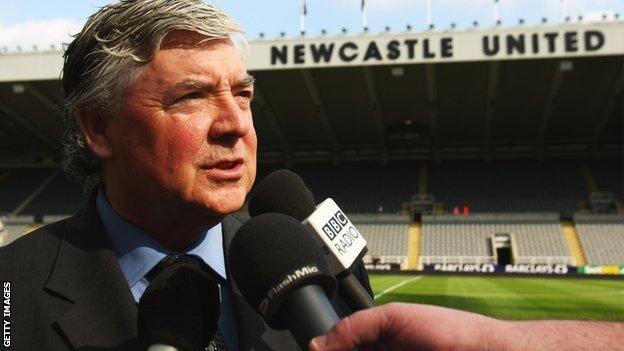 Joe Kinnear's diplomatic skills have not had any polish applied since he announced his first arrival at Newcastle United by swearing 52 times at the local media in his opening managerial news conference.

If the 66-year-old - confirmed as Newcastle's director of football on Tuesday after he broke the news himself on Sunday - is returning as a wiser, mellower and more conciliatory figure than the one who left Tyneside on health grounds in 2009, then he is disguising it with great expertise.

Close observers of life at Newcastle United have had years of practice at not being surprised by anything that happens at St James' Park, but Kinnear's return and his subsequent announcements have put this to the test.

Since the calm of a quiet close season Sunday afternoon on Tyneside suddenly rumbled to the rumours that Kinnear was on the way back, the club have left it to the abrasive former Republic of Ireland defender to set the agenda for the future.

And if owner Mike Ashley, or those who support the idea of Kinnear working with manager Alan Pardew, hoped for a smooth and low-key transition into this reshaped structure, then the new director of football has shattered that illusion.

Amid valid questions about how this alteration would impact on Pardew's future and whether the manager who has already been ordered to deliver a top-10 finish next season would be undermined, Kinnear gave an interview to talkSPORT that did nothing by way of repairing an uneasy - and in some areas nakedly hostile - relationship with Newcastle's supporters and the media covering daily events at the club.

1997: Guides Wimbledon to the semi-finals of FA Cup and League Cup

June 1999: Suffers heart attack in March during game, stands down from job

February 2001: After a three-month spell as Oxford director of football, Kinnear takes over as Luton boss before being sacked in May 2003

June 2013: Reveals he is returning to Newcastle as director of football

First things first. Kinnear did not help himself with a series of mispronunciations of key figures and players at Newcastle - but even that great statesman of world football and proud son of the north east Sir Bobby Robson struggled with names occasionally.

What he did not do, however, was deliver them as a job lot as Kinnear did, then also play fast and loose with the actual facts of which players he signed for Newcastle.

If Kinnear's intention was to make his appointment more palatable to those who question it - and most on Tyneside appear to question it - then he failed miserably.

He may also be receiving a phone call from former Magpies manager Graeme Souness for claiming credit for the signing of Newcastle's excellent goalkeeper Tim Krul.

"I brought Krul there," said Kinnear. Not strictly true, this. He was brought to Newcastle by Souness as a promising 17-year-old from Den Haag in July 2005. Kinnear arrived at the club in September 2008.

It did nothing for Kinnear's credibility or to answer queries about whether he is, after so long operating on football's perimeter, suitable to either work alongside Pardew or operate in football's global transfer market, which would seem to be his main function.

Where Kinnear may have damaged himself most, however, was in adopting an aggressive and unrepentant tone that suggested he will be willing to revisit old battles from his previous era and by dismissing his critics among Newcastle's support in blunt terms.

If Kinnear was intent on mending fences, it is strange that he appears to have turned up with a wrecking ball rather than a hammer and nails.

The media and fans who have posed reasonable questions about why he is back and what his sphere of influences will be were told: "I've certainly got more intelligence than them" having earlier suggested it was "water off a duck's ****".

Kinnear softened his tone on who would decide on transfers, moving from suggesting he would have the last word to insisting it would be done in conjunction with Pardew and chief scout Graham Carr, who has been such a significant figure in Newcastle's recent recruitment policy.

Newcastle's system operated around Carr finding players and Pardew blending them into his team. They were both given eight-year contracts as a show of faith in that long-term strategy but Kinnear's appointment changes that dynamic.

The key to Newcastle's future must be how Kinnear's relationship with Pardew works. Arranged marriages of this sort rarely succeed in football and this will be a collision of two characters with firm beliefs in their own methods and no shortage of self-confidence.

For all the diplomatic talk, will Pardew feel as if his role and importance have been reduced by Kinnear's presence? Most managers prefer to stand or fall by results fashioned by players in which they have complete faith, not those delivered to them by someone else.

In Kinnear's defence - and it would be unfair not to state these facts - he did enjoy success at Wimbledon but it was a long time ago. He cannot be regarded as one of management's stellar performers but he did have a high point in 1994 when he won the League Managers' Association manager of the year award after guiding the Dons to sixth in the Premier League.

He also took them to the League Cup and FA Cup semi-finals three years later.

Kinnear's season at Newcastle ended in relegation to the Championship but they were in 12th place when he was taken ill with heart problems in February 2009. He insists they would not have gone down had he remained and he may have a fair point.

He has not had any direct involvement in front-line football since then. Time will tell how in touch he is with modern methods and modern players as well as the ever-evolving transfer market that will be his domain.

Whether Kinnear's critics and the more sceptical supporters like it or not, he is back - and it appears Ashley has remained a fervent admirer of his ability, even in his years out of the game. Now he has taken the opportunity to invite back this combustible personality who left a lasting, if not exactly favourable, impression during his last spell.

And whether it is Newcastle, Kinnear or Ashley's intention, it is a move that ratchets up the pressure on Pardew.

Pardew signed that eight-year contract with Newcastle in September 2012 and no matter how much finesse has been worked into the details of that deal, it would be a surprise if he is forced into walking away.

How much further he gets towards its expiry in 2020 remains to be seen.

Newcastle do not do quiet and the appointment of Kinnear has already caused plenty of noise, much of it from the man himself. Turbulence and the Toon Army go hand in hand.