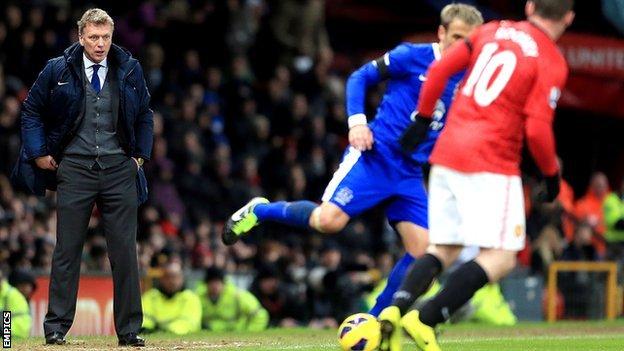 Manchester United's new era was mapped out in front of manager David Moyes with the release of the Premier League fixtures for the 2013-14 season - and Sir Alex Ferguson's successor has not been handed an easy introduction.

After an opening-weekend visit to Swansea City, Moyes will welcome Jose Mourinho to Old Trafford as he starts his own regeneration of Chelsea after his return to the club.

Moyes will follow that up with a visit to Anfield and there are no happy memories for him there following 11 years without a win at Liverpool while in charge of Everton.

The Premier League champions soon face a Manchester derby, and another new manager at City in Manuel Pellegrini, with a visit to the Etihad currently scheduled for Saturday, 21 September. City visit Old Trafford on 1 March.

First impressions can last and if Moyes comes through that opening test with a healthy position then a platform will be set as United go in search of their 21st title led by the Scot who has never won a trophy.

He will hope to be in the position to change that, if he has not already in the Capital One Cup, when he makes his return to Goodison Park on 19 April.

The announcement of the fixture list has most supporters totting up imaginary points totals, examining what they will see as crucial phases of the season - especially for newcomers Cardiff City, Hull City and Crystal Palace.

Last season's Premier League only concluded on 19 May, but for those three clubs and their supporters this is the day they have been waiting for.

Steve Bruce's Hull, back in the Premier League following relegation in May 2010, have been handed the task of wrecking Mourinho's triumphant return to Stamford Bridge on the opening day while Selhurst Park will be a raucous place to be for the visit of London rivals Tottenham.

Bruce will either feel he has been handed a horrendous start or Hull are getting the tough ones out of the way early as they follow up a home game against Norwich City with a trip to Manchester City.

Cardiff and their manager Malky Mackay start with a trip to West Ham but the eyes of most of south Wales will have instantly fixed on those long-awaited Premier League derby dates with fiercest rivals Swansea City. The Swans visit Cardiff on 2 November while the return is on 8 February.

Big days lie ahead for the Premier League's other new managers, with Everton's Roberto Martinez starting with the long trip to Norwich City and Mark Hughes, back in the Premier League after a reputation-damaging spell at QPR, taking Stoke City to Liverpool.

At Anfield, manager Brendan Rodgers will be hoping to improve on last season's seventh place and he will have noted a hazardous Christmas programme which sees them travel to Manchester City on Boxing Day then Chelsea two days later.

This for another day. For all who say it is simply a matter of each team playing each other twice, the new fixture list offers hope and pessimism in equal measure up and down the Premier League and marks the start of the countdown to the new season.

Club-by-club fixtures for the new season: